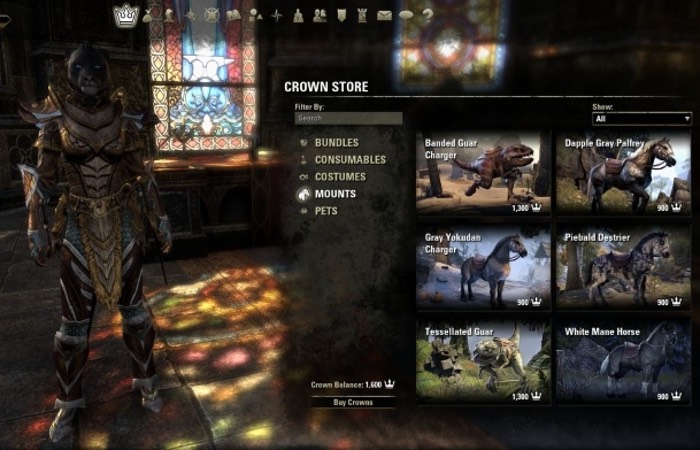 Even though the Elder Scrolls Online in now free to play-to-play, like similar online games that have taken the freemium route such as Planetside 2. Soon players of Elder Scrolls Online Will be able to use their hard earned cash to purchase potions within the game that will boost XP and health.

As well as XP and health potions players will also be able to purchase aesthetic items as well as vanity pets, fancy costumes and upgrade their mounts.

The new in-game purchase for real cash will be available to purchase Crown Store, after players have converted your cash into the new crown currency. The game’s developer Zenimax Online Studios explains a little more :

“As part of the changes coming to ESO, we’re adding a virtual currency (crowns) to the game, along with an in-game Crown Store where you can purchase items like potions, soul gems, mounts, vanity pets, costumes, and more. You can see most of these changes right now on our playtest server (PTS).

The most important thing to remember about Tamriel Unlimited’s virtual currency system is that we’re not adjusting the base game—it will be exactly the same game, with the same leveling pace, experience point gain, user interface, etc. that you have been used to since April of last year. We’re adding customization and convenience items in the Crown Store, but those will be added to the game as it is now; we’re not going to make it harder for you to enjoy the game you already play to encourage you to use the Crown Store.

The health, stamina, and magicka potions that are available in the Crown Store. They can be purchased with crowns, but they’re functionally very similar to the potions you can purchase from in-game vendors, and they’re somewhat weaker and less effective than player-crafted potions. This gives the player a choice: spend some crowns to get potions right now, or play a while to earn in-game gold and then spend it either at a vendor, another player, or at a Guild Store.”

For more information on the new Elder Scrolls Online updates jump over to the official ESO website for details.