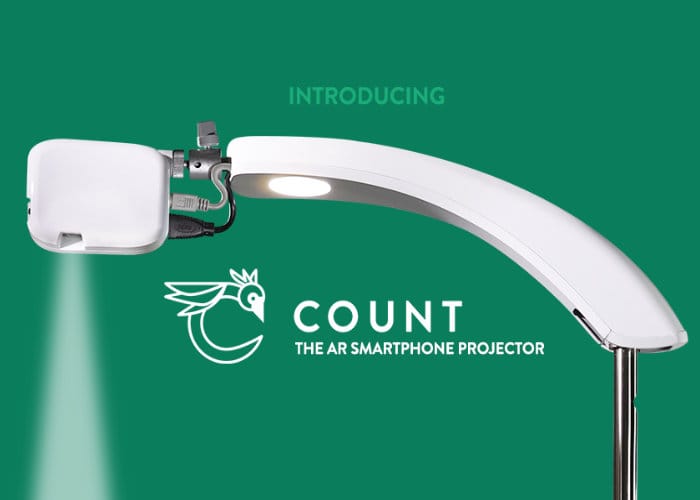 Yinscorp based in Irvine, California have created a new projector that is being marketed as the world’s first smartphone augmented reality projector, in the form of the Count AR projector. Designed to provide an easy way to project videos and applications onto your ceiling, wall, desk or counter top the Count AR projector has this week launched via Kickstarter to raise the $10,000 required to make the jump into production. Watch the demonstration video below to learn more about the Counts features and functionality.

The Count AR projector is available to back with pledges starting from $179 or £127 offering the simplest version of the projector which includes the base with embedded Bluetooth speaker, microphone, lamb and smartphone holder. After the Kickstarter campaign the price of this package will increase to $229. “Count allows students to learn in the format they’re comfortable with – kids already use their Smartphones & Computers to learn and communicate. Count is an interactive projector that allows you to physically interact with your apps and media in a way that phones, tablets and computers don’t allow. Count has developed several apps to be available at launch, and their open platform allows for new interactive books, apps, games and more!”

If all goes well worldwide shipping is expected to take place during December 2018. For more information, full specifications and a full list of all available pledges jump over to the official Count campaign page by following the link below.