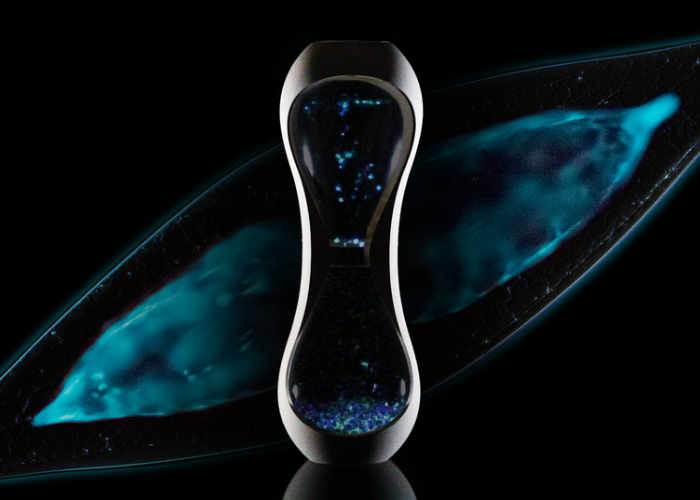 A unique aquarium has been launched via Kickstarter this week in the form of the BioGlo Bioluminescent Aquarium which has been created by Magical Microbes and follows on from their previous successful Kickstarter campaign Magical Microbes launched earlier this year. Watch the video below to learn more about the bioluminescent aquarium which has been designed to bring nature’s most beautiful light show into the comfort of your home.

BioGlo is a truly unique aquarium that maximizes visibility and interaction with one of nature’s most beautiful phenomena: bioluminescence. Inside its sleek hourglass shape, Bioglo contains hundreds of tiny microbes called dinoflagellates (a.k.a. dinos). These dinos have the natural ability to absorb the sun’s rays during the day and emit a mysterious blue glow when shaken at night. By providing the right conditions for the dinos to thrive, BioGlo makes it easy to care for the microbes and observe their bioluminescent effect in the comfort of your home or classroom. We designed BioGlo to maximize the visibility and duration of the bioluminescent effect while simultaneously emphasizing interaction with the microbes through 3 main modes of use:

– Bubble Mode: Letting the BioGlo bubble next to you as you go to bed will ease your mind and help you drift off to sleep
– Streak Mode: Like little bolts of lightning, watch the dinos dazzle as they travel down the side of the hourglass body
– Whirl Mode: Behold the power of hundreds of dinos lighting up together at once, forming a dazzling vortex display

With extensive ideation and iteration, we’ve created a product that strikes the right balance between reliability, aesthetics, and functionality.

Jump over to the official Kickstarter campaign page by following the link below to make a pledge from $65 or £49 with shipping expected to take place during March 2018.