If you have seen slingshot creations by Joerg Sprave before you will already know that is not much he hasn’t already tried to fire from the slingshot and now the slingshot master is upping his game to include glass ashtrays.

Joerg Sprave has created a pump action glass ashtray slingshot called the Barfight Dominator that can hold four ashtrays in total and at close range can decimate a watermelon with ease. Watch the video after the jump to learn more about the Glass Ashtray Slingshot project and see it in action. 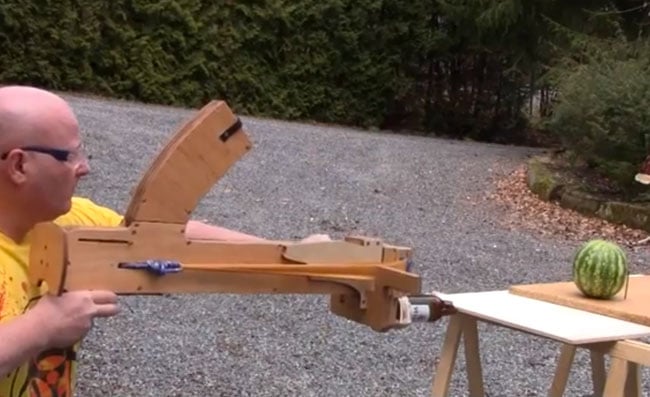 “Glass ashtrays are fearsome weapons in bar fights. The heavy, hard things can break bones and skulls! These days they are pretty cheap as most bars only allow smoking in certain areas (mostly outside).

The Slingshot Channel presents to you a slingshot that shoots glass ashtrays, with mighty force! It is chambered for the 75x30mm Ashtrays. Those weigh 245 gramms (0.56 lb) each. The weapon holds four of them in the clip, 1 more in the chamber.

A pump action shooter that you put against your chest and the draw back with both arms. Thanks to the specifically designed mechanism that isn’t very hard.”