Fans of Baldur’s Gate that also own a Mac system might be pleased to learn that, the games developers have today announced that the new game will be arriving on the OS X operating system as a native package.  The announcement was unveiled via a Tweet from Beamdog creative director Trent Oster, who broke the news. 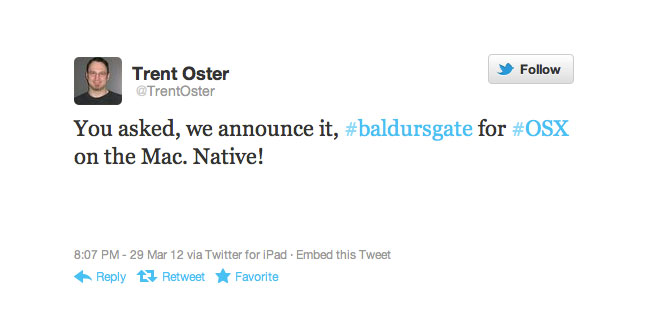 In addition to the announcement it was also revealed that all three versions of the game on PC, Mac and iOS will all still play in a similar style. Even though the iPad version will obviously be equipped with touch screen controls.

Earlier in the week it was announced that the new Baldur’s Gate II: Shadows of Amn iPad game will also support multiplayer and the development team have no intention to cut down on the size of the game, to release it on Apple’s iPad later this year. Cameron Tofer, COO of developer Beamdog explains:

“Baldurs Gate is a pretty big game and we’re not cutting it down to size,” – “There’s a boatload of content there, 80+ hours. “

Baldur’s Gate II: Shadows of Amn iPad game will be arriving in the summer 2012 for less than $10. Lets hope the PC and Mac OS X versions launch at a around the same time.