If you don’t know, Apple managed to win the Harris Poll’s Brand of the Year award in three different categories with tablets being one of them. Yes, Apple iPad was selected as the winner for the tablet category. However, according to a data by Trend force, Apple iPad is losing its grip in the market. The iPad has fallen to the lowest point in the global tablet market during the second quarter this year. Apple revealed earlier that iPad shipments fell drastically to 14.6m from 17m. According to Trendforce’s research division, this is almost 35.5 percent of the global market share, the lowest Apple has ever hit. 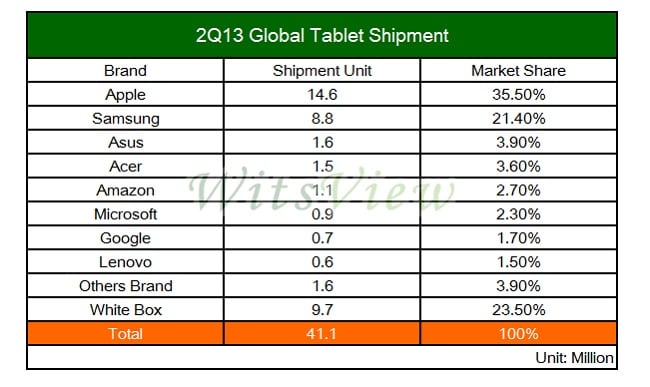 If the trend continues, it is expected that it will further fall during the third quarter as well. However, rumors have it that Apple will be unveiling the next generation iPad along with updated iPad Mini. Apple is also expected to unveil the much anticipated budget iPhone and the next generation iPhone in September. This can help the Cupertino based company to gain the long lost market share.

The tablet market is not what it used to be. The competition is increasing day by day with other manufacturers launching high-end tablets with better specifications that the iPad. Recently, Google launched the Nexus 7 with Amazon also working on updating its Kindle series as well.

I think this will be a action-packed quarter. With so many devices underway, we will definitely see some decent competition between different smartphone vendors.