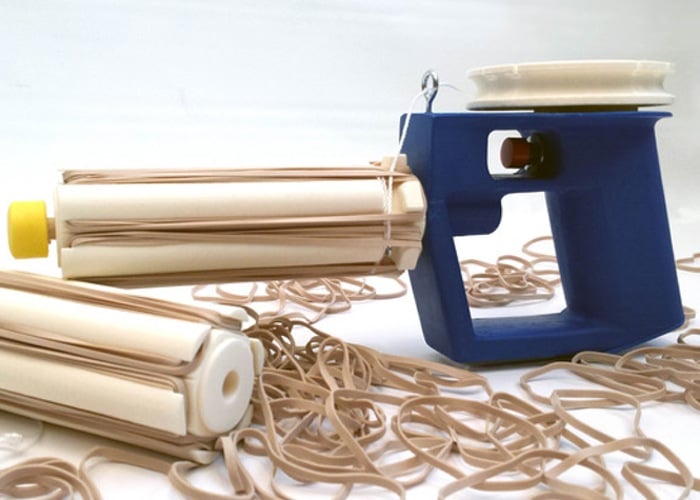 Looking to upgrade your rubber band weaponry? If you are this 3D printed rubber band gun Blaster Kit might be worth a little more investigation.

The Blaster Kit is capable of firing up to 10 rubber bands per second and is equipped with a quick reload facility that allows you to carry extra magazines of rubber bands for when you really need that extra firepower. Watch the video after the jump to learn more about the rubber band Blaster Kit.

The Blaster Kit has been designed to allow you to control the rate of fire, squeeze the trigger briefly and fire once, hold it down and release a torrent of rubber bands. Its creator Dorhout R&D explains :

“You’ve had that 3D printer sitting on your desk printing out all kinds of respectable things like gears, enclosures, and other serious parts.  However, you’ve always wondered if there wasn’t something more that it could do, something that would really stand out and possibly get you that reprimand at work you’ve always wanted.

Since you’re the one printing it, use whatever colors you like!  Some printers even make it easy to print one piece in multiple colors.  Just have fun with it.

We’ll send you the .stl files that you can then use with your 3D printer to print out the body of the RBB-32.  You’ll then need to source the motor, battery case, trigger button, screws, string etc.  It shouldn’t be too hard, especially if you already have the parts laying around.”

For more information on the new rubber band Blaster Kit jump over to the Kickstarter website for details.