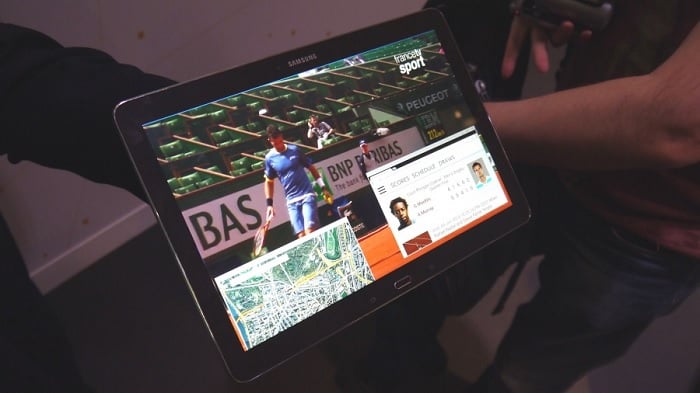 Samsung is rumored to be working on a new Galaxy Tab S tablet lineup, but none of them comes with a 12-inch screen and a 4K UHD resolution. But, it may change in the coming months.

Recently, an alleged 12-inch Samsung tablet was spotted at Roland Garros, the place where the French Open is taking place. The tablet was being used as part of a LTE Broadcast demonstration at the big event.

By the looks of it, it doesn’t appear to be the Galaxy Tab S lineup, which has leaked extensively in the past few weeks. It comes with the usual Samsung home button, as well as the capacitive buttons, and a Samsung logo on the device.

The Korean company has scheduled an event on June 12th where they are expected to announce the new tablets. They come in two screen sizes: 8.4 and 10.1-inch sporting a resolution of 2560 x 1600 pixels.

Currently, there isn’t any decent 4K tablet available in the market, except a gigantic one from Panasonic, but it seems things might change in the coming months. During an event in Paris, Qualcomm’s Raj Talluri said 4K tablets would become a reality by the end of the year.

Anyway, Samsung’s event will take place next week, and we’ll update you if anything interesting comes up other than the Galaxy Tab S.