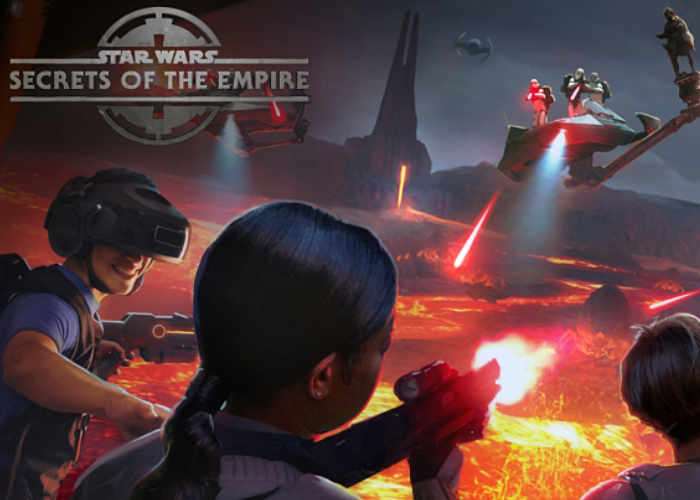 The VOID has announced a newStar Wars virtual reality experience will be launching at two Disney theme park locations this holiday season providing a Star Wars experience entitled Secrets of The Empire.

Unfortunately no details on what you can expect from Star Wars: Secrets of the Empire have been announced as yet although participants will be able to move freely throughout “the untethered, social, and multi-sensory” experience that includes sounds, sensory touch and smells.

At The VOID, we combine the magic of illusion, advanced technology and virtual reality to create fully immersive social experiences that take guests to new worlds. A truly transformative experience is so much more than what you see with your eyes; it’s what you hear, feel, touch, and even smell. Through the power of The VOID, guests who step into Star Wars: Secrets of the Empire won’t just see this world, they’ll know that they are part of this amazing story.

We couldn’t be more excited to announce the production of our newest hyper-reality experience, Star Wars: Secrets of the Empire. This first-of-its kind Star Wars experience is being produced by the world-class teams at Lucasfilm and ILMxLAB in collaboration with the team here at The VOID. Soon you’ll have the opportunity to step beyond reality into a galaxy far, far away!

Star Wars: Secrets of the Empire will plunge guests directly into the iconic Star Wars galaxy. They will move freely throughout the untethered, social, and multi-sensory Star Wars: Secrets of the Empire experience in a way that allows them to interact and engage with friends, family and Star Wars characters. This ground-breaking experience will open to the public at two new VOID Experience Centers at Downtown Disney at Disneyland Resort and Disney Springs at Walt Disney World Resort beginning this holiday season.