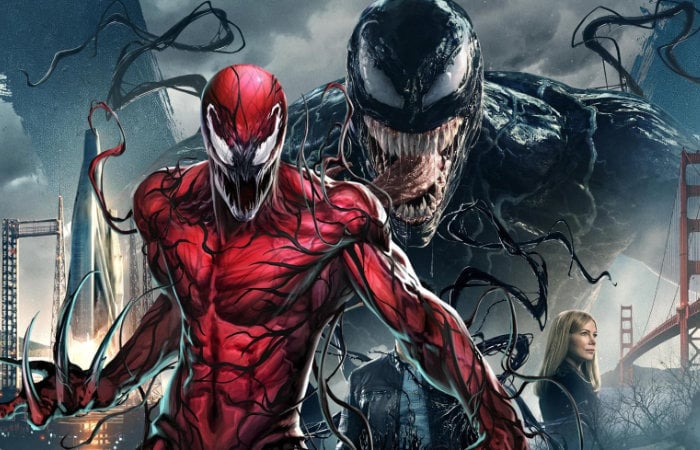 Sony Pictures Entertainment has released a new trailer teasing the upcoming Venom 2 film entitled “Let There Be Carnage”. The second movie in the Venom franchise will be premiering exclusively in movie theatres during the fall of 2021 and once again stars Tom Hardy as Venom/Eddie together with Michelle Williams, Naomie Harris, Reid Scott, Stephen Graham and Woody Harrelson.

Venom 2 Let There Be Carnage is scheduled to be theatrically released in the United Kingdom on September 15th, 2021, and then in the United States on September 24th 2021. “One year after the events of Venom (2018), investigative journalist Eddie Brock struggles to adjust to life as the host of the alien symbiote Venom, which grants him super-human abilities in order to be a lethal vigilante. Brock attempts to reignite his career by interviewing serial killer Cletus Kasady, who becomes the host of the symbiote Carnage and escapes prison after a failed execution.”

“During the long development of the 2018 film Venom, the character Carnage was expected to appear as an antagonist.During pre-production on that film, the creative team decided not to include the character so they could focus on introducing the protagonists, Eddie Brock and Venom. Director Ruben Fleischer felt that leaving Venom’s most formidable villain for a sequel would give the franchise a place to go and would be a natural next step, so Carnage’s alter-ego Cletus Kasady was introduced in a mid-credits scene at the end of the first film with the intention of featuring him in a sequel.”

As more teasers and trailers are released for the upcoming Venom 2 movie will keep you up informed as always.