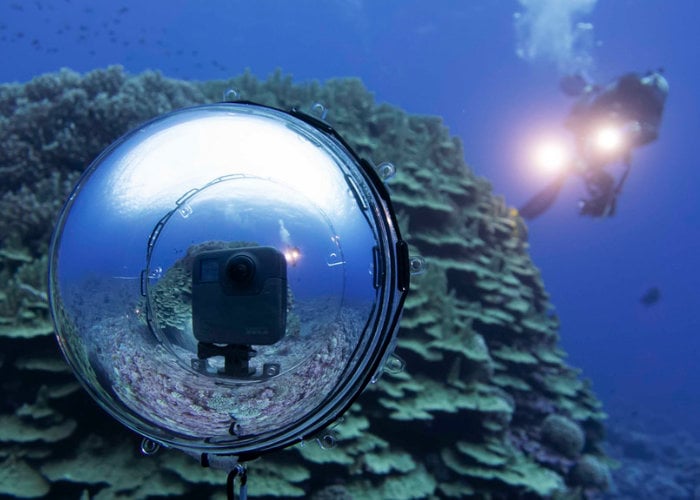 If your 360 degree camera requires an underwater housing, the new aptly named 360bubble DEEP underwater camera housing might be worth more investigation. Designed to provide a professional case built from Transpalite SS Acrylic, a material that exceeds the strict requirements of the ASME PVHO (Safety Standard for Pressure Vessels for Human Occupancy). Providing a high quality product to add to your diving and freediving gear that will go to a full tech diving depth of 150 meters underwater. Check out the video below to learn more.

“Here at 360bubble® we were lucky to get hands on one of the first consumer 360 cameras back in 2016. As soon as we took the first Street View style photo with it on land we knew we wanted to take the camera diving so we could capture underwater 360 photos and videos. What an immersive way to share the wonders of the sea! But we found that even though some 360 cameras were waterproof they could not capture full 360 pictures underwater because of how the optics changed from air to water…so we put ourselves to work on a solution… …and created the first 360bubble underwater housing to allow these cameras to work beneath the surface! Since then we have travelled far and wide around the world learning more and more about getting 360 cameras underwater along the way. We have taken 360bubble on fun trips, research expeditions, and working conservation dives and our community have shared some amazing experiences with us that they have captured with 360bubble.”