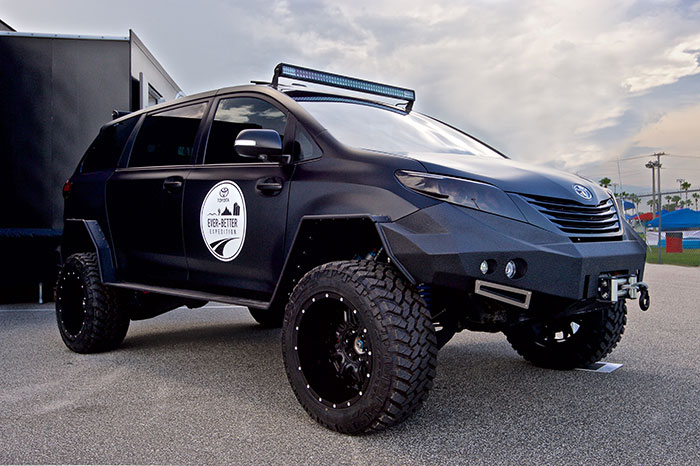 Toyota will have one of the coolest things it has ever made on display at SEMA and that awesome ride is called the Ultimate Utility Vehicle. The hopped up Sienna minivan has as much in common with the Toyota Tacoma truck as it does with the Sienna soccer moms around the world use to take kids all over the place.

To become the Ultimate Utility Vehicle, Toyota took the body from the Sienna and grafted it onto the frame of a Tacoma 4×4 truck. That truck has a TRD supercharger on the engine for more power, is lifted for off-road prowess, and looks. The UUV has 22×12-inch Monster Energy wheels and upgraded hemi steering.

This ride was used last summer in the 110-day North American leg of the Toyota Ever-Better Expedition that saw the UUV and other vehicles drive 16,500 miles of difficult terrain. That 16,500-mile run saw the vehicles travel from Death Valley to Alaska to Manhattan, to Pike Peak with lots of stops in between. That vehicle and several others will be on display at the Toyota SEMA booth next month. One of those other vehicles is the #19 Toyota Camry racing car from the NASCAR Sprint Cup.