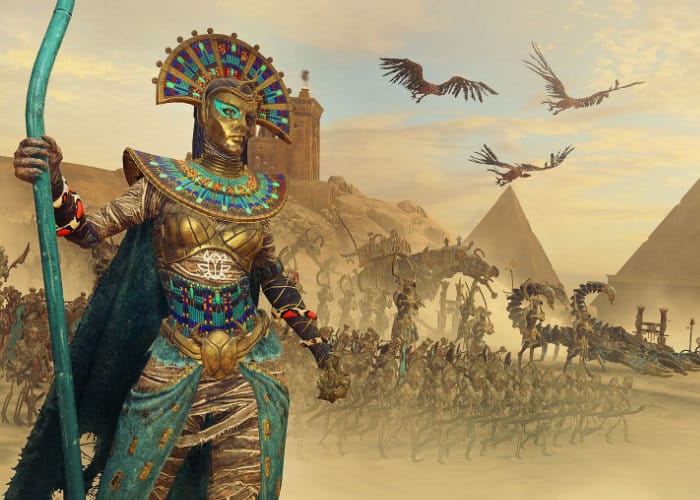 Total War Warhammer 2 players looking forward to the release of the new This Kings DLC which will be arriving later this month on January 23rd, 2018. Are sure to enjoy this new gameplay footage which has been created by the team over at Eurogamer and provides over 30 minutes of Tomb King’s gameplay for you to enjoy. Providing a quick glimpse at what you can expect from the new content that introduces a brand-new race to the fold from the Warhammer Fantasy Battles world.

Rise of the Tomb Kings introduces four new playable factions, each with their own Legendary Lord and new campaign mechanics as well as adding a comprehensive roster full of unique and exciting new units four players to enjoy. Games Workshop explains that in response to player feedback, Rise of the Tomb Kings does not contain any supplementary story campaign, but instead adds two additional Legendary Lords bringing the total to four, each with their own skills, traits, quest lines, situational challenges and legendary gear for players to enjoy. The Lords include Settra The Imperishable, High Queen Khalida, Grand Hierophant Khatep and Arkhan the Black.

The Rise of the Tomb Kings campaign pack will also be available to play in both the Eye of the Vortex campaign and Mortal Empires from Launch. However the Tomb Kings do not seek to influence the Vortex itself, and therefore do not engage in the race for control of it. But find the nine cursed Books of Nagash, and adventure that culminates in an epic battle at the Black Pyramid of Nagash. Enjoy! For more information what you can expect in the Tomb Kings DLC jump over to the official Total War website by following the link below.