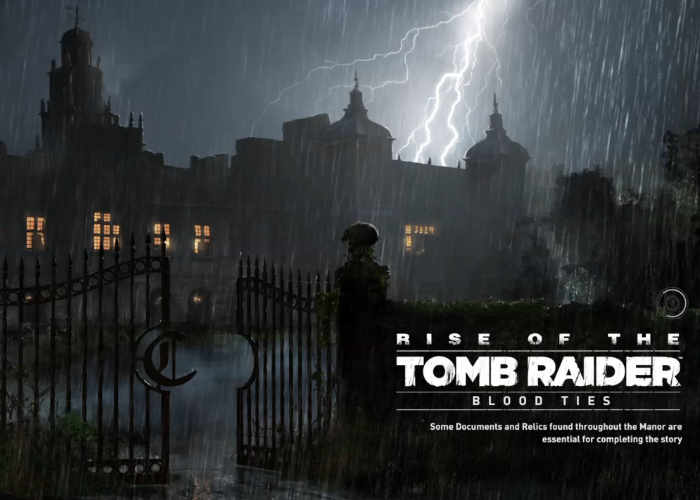 After first being released back in October 2016 the virtual reality support for the Rise of the Tomb Raider Blood Ties expansion is now supported on the PC. The virtual reality support for PC has been a long time coming and has been available on the PlayStation VR platform soon after its release, leaving those owning the HTC Vive and Oculus Rift waiting patiently for the new VR content. If you haven’t already purchased the expansion Blood Ties is part of the 20 Year Celebration Pack, and is now available at a reduced price of £4 and is also available as part of the Season Pass which is priced at £10.

Some things to remember before you dive into the Tomb Raider Blood Ties expansion include :

– To gain access to Croft Manor content, you have to play the main Rise of the Tomb Raider game up to Siberia first (around an hour’s play).

– Croft Manor is packed full of collectible Documents and Relics, and is the central way of telling the expansion’s story, so collect them in the order you see them. Most are obvious and out in the open, and some are essential to completion, but there’s a good chance you’ll miss a few along the way; thankfully none are missable, so you can return later after the story is over to mop them up.

– Some Relics allow you to examine them further in some way. While not essential, the game will specifically say there’s something else to notice, and provide a little extra story insight.

– There are several ‘Gear’ items that open up new areas of the Croft Manor. All of them are essential to completing the story, so don’t worry if don’t have one yet, you’ll get it eventually and can come back later.

– On PS4, you can play the entire Blood Ties expansion using PlayStation VR.

– As you’ll discover by the end, there are three Relics that can only be uncovered once you’ve completed the main Rise of the Tomb Raider story. They aren’t at all essential to playing, but are required before you can collect that ‘Home Raider’ achievement.

If you are looking for a great walk-through and guide to the Tomb Raider Blood Ties expansion jump over to the new Redeemer website by following the Guide link below. Jump over to Steam to purchase.