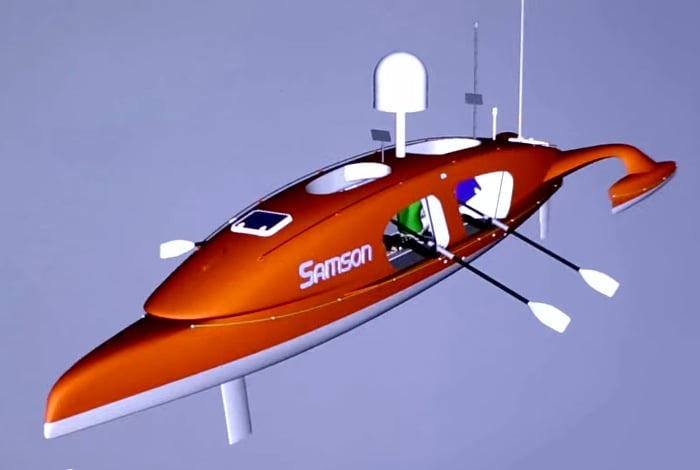 Experienced rower Andras Bakos and his teammate are currently in the final preparations to row across the Atlantic in a specially designed rowboat called The Samson.

The Samson has been in development since 2011 and has been built in conjunction with LOMOcean Design, the design firm that also helped designed and created the TURANOR PlanetSolar solar-powered yacht, and the Earthrace alternative fuel-powered boat.

The Samson measures 13.4 x 2.9 meters in size and has a dry weight of 650 kg, but fully laden with all the supplies the team will require for the Trans-Atlantic crossing the boat weighs in at 1.2 tonnes. The rowboat is not equipped with any motors or sales and relies entirely on the two rowing stations and its crew for propulsion.

The team comprises of already mentioned Andras Bakos and New Zealand-based expedition partner Erik Harrewijn who will be rowing 24 hours a day to make the 3,800-mile crossing in somewhere between 60 to 80 days. The team is also looking for help to fund the adventure over on the Indiegogo website. Andras explains a little more :

“I had decided to row across the Atlantic ocean in a way that nobody else did it before,”-“Certainly it is a personal challenge as well (if it would not be, better to not even start) but the main cause is to draw the attention of the widest public possible for the critical need of the environmental preservation, as Earth is the only place where our children can live.”

For more information on the new Trans Atlantic crossing and the futuristic boat the team will use watch the video below or jump over to the official or Indiegogo website for details.