The all new HTC One is one of the worst kept secret of the Taiwanese OEM. The handset has leaked extensively in the past few months, even the folks at HTC teased the handset quite a few times before.

Now, the guys over at Android Central spotted an ad outside a Phones 4U outlet that shows a pixelated image of the alleged HTC One (2014) asking potential customers to register their interest, along with March 25th date, the day when HTC is expected to unveil the highly rumored handset. 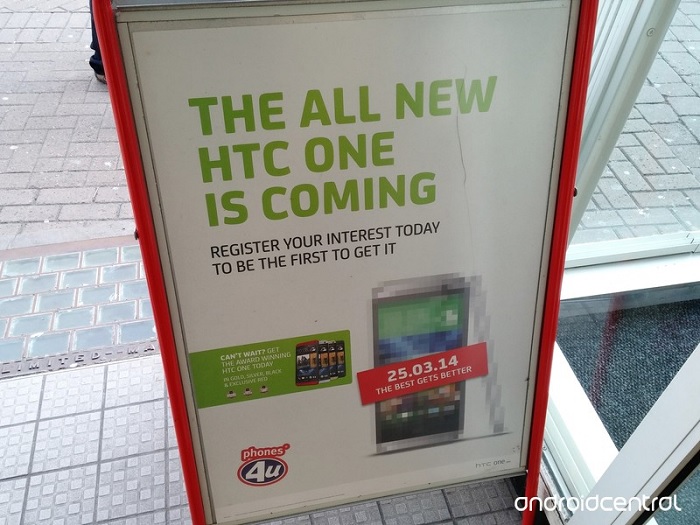 The poster outside Phones 4U clearly states, “Thee all new HTC One is coming. Register your interest today to be the first to get it.” I don’t think there’s any doubt left now that HTC will unveil its flagship device later this month. For those of you who don’t know, HTC will hold an event on March 25th, which will simultaneously take place in both London and New York City.

As far as the specifications are concerned, rumors suggest it will rock a 5-inch 1080p display, a quad-core Snapdragon 801 chipset, 2GB of RAM, 32GB storage with a microSD card slot, dual-cameras on the rear, 4G connectivity, NFC and should come with Android 4.4.2 KitKat with Sense 6.0 UI as its operating system. The handset will support nanoSIM, according to a latest leak.

In less than two weeks, HTC will take the wraps off its primary flagship for 2014. We’ll update you as soon as it gets official.