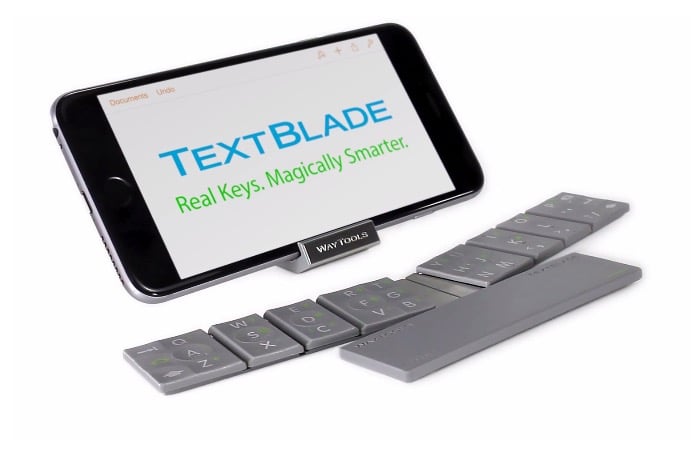 The keys of the portable keyboard are equipped with capacitive touch technology similar to that used in smartphone and tablet touchscreen allowing the keyboard to provide multitouch features as well.

The capacitive touch technology within the keys allows up to 6 different characters to be placed on each key, together with offering a full 19 mm finger spacing. Providing the functionality of a full-size keyboard in a small portable keyboard with a stylised design.

Within the spacebar is housed a lithium-ion battery that provides around one month of typical usage on a single charge. Another great feature is that the TextBlade is supplied with a carrying sleeve to protect the keyboard whilst not in use, that also doubles as a stand for your smartphone or tablet whilst typing.

Production is currently underway and pre-orders are currently available for $99 with shipping expected to start at the beginning of next month. Watch the video below to see a demonstration of real typing on a TextBlade, showing typing speeds at over 100 words per minute. For more information on the new TextBlade jump over to the WayTools website for details via the link below.