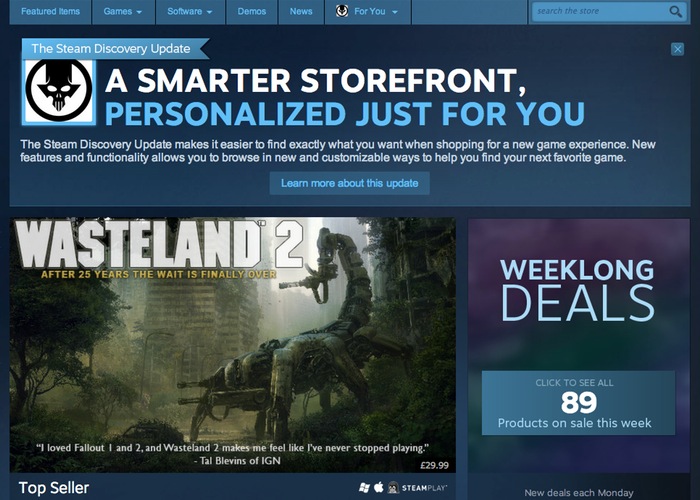 Valve has today announced the launch of the new Steam Discovery Update which has been created to introduce new features and enhancements specifically designed to improve the Steam shopping experience.

Valve also announced today that their Steam games network is now enjoying over 100 million active accounts and in the last nine months more than 1300 new titles have been launched by the Steam gaming network.

Valve has also this month rolled out a new update to its Steam Search which now includes extremely detailed filters together with a new feature called “Curators” that allows anyone to become a taste maker and build a following. Valve’s Alden Kroll explains a little more :

“We have made great efforts to increase the number of titles we can publish on Steam, which means more choices for customers,”-“This update introduces multiple features and functionality to help customers explore Steam’s growing catalog and find the games they are most interested in playing.”

For more information on the new personalised store feature jump over to the official Steam website and login.

“The Steam Discovery Update starts with the new, smarter Home page, which introduces a variety of ways for you to explore the over 3,700 titles now available on Steam.

Specifically, the new features at your disposal from the Home page include personalized recommendations based on your gameplay, reviews from your favorite community Curators, and powerful new search and discovery tools.

To further personalize your Steam shopping experience, many areas are customizable and automatically filter out the products that you have already bought and the titles you have indicated you aren’t interested in.”