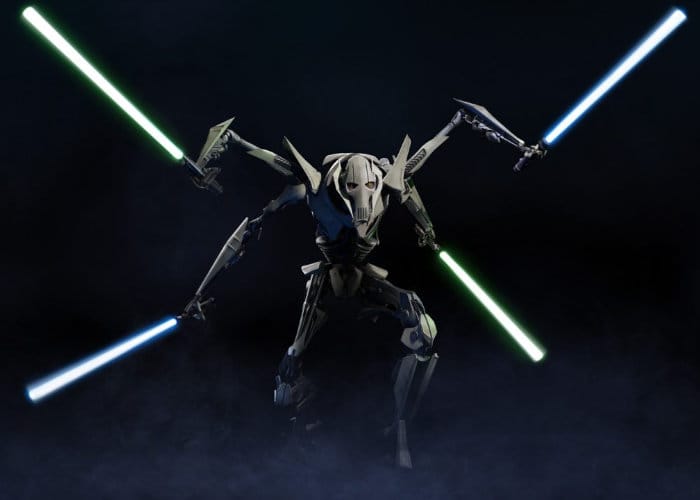 – In Star Wars Battlefront II, General Grievous is designed to instigate fear and feel like an overwhelming opponent. His body frame is among the largest compared to any other character in the game, and he engages in combat with two – sometimes four – lightsabers.
– For base attack sequences, General Grievous swings two lightsabers. While on defense, he can also use the same to deflect enemy sabers and blaster shots.
– But the skilled fighter was also known for his signature moves featuring no less than four Jedi weapons, which were all conquered from their previous owners (we’ve modeled his lightsabers after their appearances in Star Wars™: Episode III – Revenge of the Sith™). In Star Wars Battlefront II, we’ve transferred a couple of those moves to his Abilities.
– First, we have Thrust Surge. This one was referenced from an encounter between Grievous and Obi-Wan in the Clone Wars series. The attack thrusts Grievous forward with all four lightsabers in a stabbing motion, dealing damage and throwing the target to the ground.

The second is Unrelenting Advance. As seen in another battle with Obi-Wan Kenobi in Revenge of the Sith, Grievous forms a spinning lightsaber wall in front of him, with sparks igniting from the floor, as he advances like a horrifying machine. Going into Unrelenting Advance, General Grievous blocks all frontal attacks while dealing damage to anyone foolishly standing in his way.

For more details on what you can expect from the new General Grievous update jump over to the official EA website by following the link below.