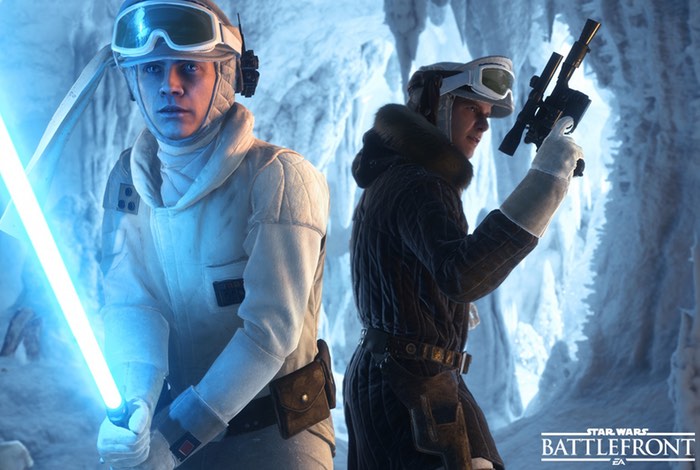 EA has today announced that the development team at DICE is currently in the process of creating a new Death Star map for the popular Star Wars Battlefront game that was launched late last year.

Tomorrow EA will also be releasing more free content for SWB players to enjoy in the form of adding support for the Tatooine Survival map for Blast, Droid Run, Drop Zone, Hero Hunt, and Heroes vs Villains multiplayer modes, and is called Raider Camp.

As well as new Hoth-themed outfits for Luke Skywalker and Han Solo as in the picture above, the ability for players to create Private Matches and the introduction of Daily Challenges and Community Events as well as more tweaks and performance enhancements.

As we said back in November, the release of Star Wars Battlefront was just the beginning. Our team has been listening to your feedback and building a calendar of new content and tuning changes we will be making to the game throughout 2016. All fans will get free* content that includes new maps for both multiplayer and Missions modes, the introduction of Private Matches, new Hero outfits, and more. Fans looking to get even more out of their Star Wars Battlefront experience can look forward to the Star Wars Battlefront Season Pass*, which will introduce a wealth of fresh content set across exciting new locations including Bespin, the Death Star, and more.

In March, we will be adding another exciting new multiplayer map on Endor that will support Walker Assault, Supremacy, and Turning Point, and an additional Tatooine Survival map. In addition to the free content we will be delivering through March, we will continue to listen to our community throughout the year and provide updates designed to make Star Wars Battlefront even more fun for everyone.

For more information on the new Star Wars Battlefront content jump over to the official EA blog website for details.