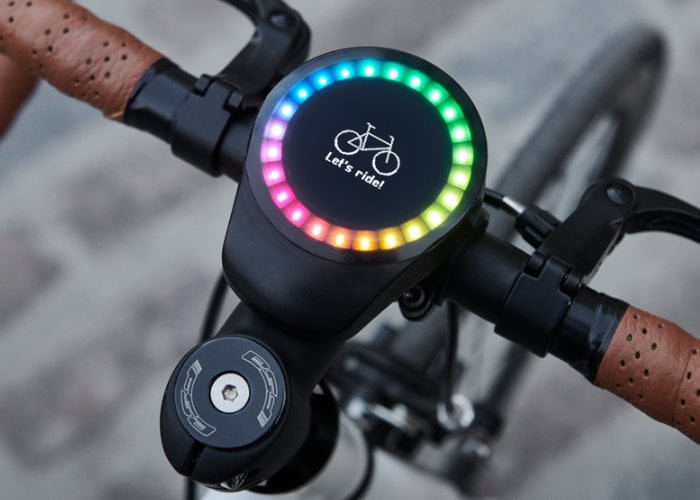 Following on from their previously launched bicycle navigation system launched back in 2015 SmartHalo have once again taken to Kickstarter to launch their second generation of award-winning bicycle systems in the form of the aptly named SmartHalo 2. With still 29 days remaining on the campaign the project has already raised over CAD$540,000 thanks to over 3000 backers. Watch the demonstration video below to learn more about the SmartHalo 2 bicycle navigation system, alarm, fitness tracker, light and virtual assistant.

“Designed by cyclists, for cyclists; SmartHalo 2 is the all-in-one connected device that breathes life into your bike. It helps you discover new routes with clear navigation signals. It protects your bike with an ear-piercing anti-theft alarm. It lights your way with a completely redesigned, all-powerful front light. It tracks and displays your cycling metrics without having to push a single button, syncing with the fitness apps you already use. It keeps you connected to what matters with the brand new, customisable PeekDisplay. And it looks, feels, and works unlike any bike computer out there. “

“We’re obsessed with simplicity – we want cyclists to focus on their ride, not on tech. That’s why there’s no on or off button on SmartHalo. It greets you with a colorful animation of your choice as soon as you hop on your bike and turns off on its own when you’re done riding. Our patented, luminous halo gives you just what you need, at a glance. It lights up in the direction of your turns. When you’re aiming for that fitness achievement, your progress fills up. When receiving an incoming call, it pulsates like a heartbeat – a loved one is calling. This is not another overly complex bike computer. “

Early bird pledges are available from £78 or CAD$134 with worldwide shipping expected to take place during December 2019.