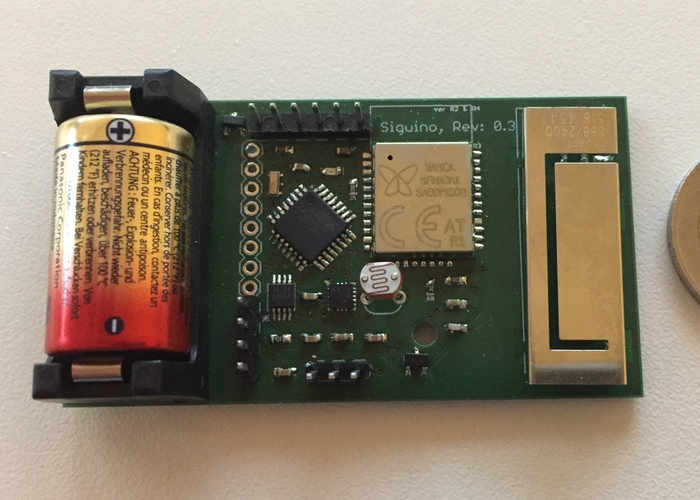 Scott Tattersall has developed a new low-power Arduino board which includes built-in support for Sigfox and the ability for it to be powered by a 3V CR2 battery. Designed to be used for Internet of Things projects the tiny Arduino development board is a built in cloud connection and supports back-end services with IFTTT integration. The Siguino is based on an Arduino Pro Mini and so uses an Atmega328p, other components include:

This device is designed to be low power so that it can be run from a single small battery from between 6 months to a number of years depending on how often messages are sent over the network (every 15mins vs once per day for example). The default Arduino software loaded on the device uses the low power library from here to make sure the main chip is in sleep mode for the majority of the time, only waking to take basic measurements such as ambient temperature once per minute. I’ve used the Nordic Semiconductor Power Profiler to extensively test the power consumption of all the components in real usage scenarios

The low-power Arduino board is now available to backfire Kickstarter with pledges available from just €15 or £13 and shipping expected to take place during January 2018. For more details and full specifications of the Siguino jump over to the official Kickstarter campaign page by following the link below.