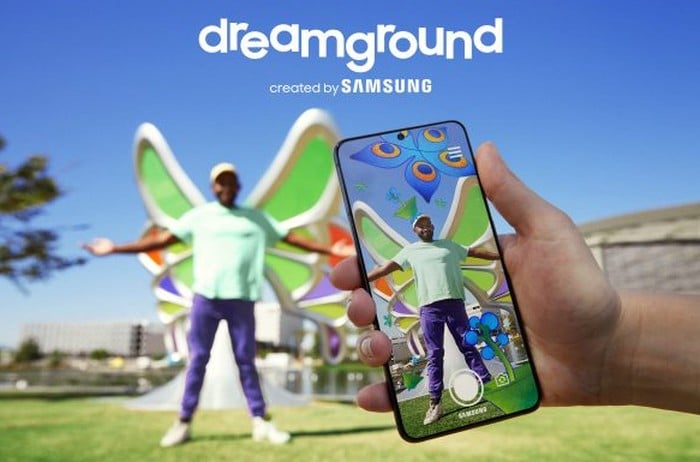 Samsung has this week introduced its new Dreamground platform providing a physical and digital playground, capable of connecting physical structures, on-screen animation and AR into unique experiences accessible from your phone. “Dreamground created by Samsung transforms the world around you into a fantastical AR wonderland” explains Samsung.

Check out the quick promo video below to learn more about what Samsung is hoping to achieve with Dreamground which is now available on both Android and iOS. Also if your based in New York a Dreamground experience is now accessible at Hollywood Park in Los Angeles and the company’s flagship experiential store, Samsung 837, in New York City.

“Discover three magical AR worlds – Bubbloonland, Fluttering Forest, and Crystal Galaxy. Explore, create and collaborate with others as you encounter surprises in each world. Blow up a bubbloon dog, shower yourself with butterflowers, or crawl inside a crystal egg! Build the world around you with persistent AR elements. Place and spawn interactive elements on any surface, or draw midair to make custom floating creations. Capture content seamlessly and save it to your phone as a photo or video. For extra fun, turn the camera around and play with surprising Dreamground camera filters. Explore immersive 360 portals that place you in each Dreamground world. Use the power of Galaxy 5G to unlock an exclusive Dreamground world.”

“Dreamground can also be accessed through 4K film projected on the Infinity Screen by Samsung. Built for the future, the videoboard has the largest LED content playback system ever deployed. With nearly 80 million pixels spaced 8 millimeters from center to center, each panel can be uniquely or congruently programmed with statistics, live and/or animated content. The AR creations and interactive face filters become unique content (photo and video) opportunities for visitor’s to share across social channels.”

“Further, the Dreamground experience features portals that are exclusive to Galaxy 5G device holders on Verizon. These Galaxy 5G Portals feature 4K, 360 streamed video and ultra-high fidelity AR. The ability to explore and interact in high resolution and in real-time showcases the power of the high bandwidth and low latency of 5G.”

For more information on the Samsung Dreamground augmented reality experience jump over to the official Samsung news site by following the link below.