Apple is expected to schedule an event on September 10 for the official unveiling of the iPhone 5C and iPhone 5S. Rumors suggest that Apple will unveil iOS 7 at the same event with the public release date of September 16. Now, the rumor has been confirmed by Nuance, a company that is working closely with Apple and powers Siri’s speech recognition capabilities. 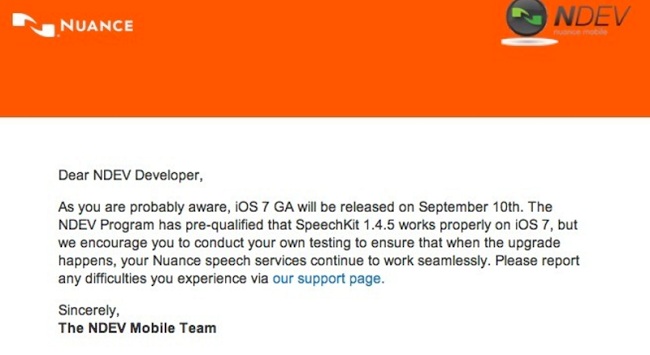 Today, a developer named Owen William received an email from Nuance that iOS 7 would be released to thegeneral public on September 10. The email reads, “As you are probably aware, iOS 7 GA will be released on September 10th. The NDEV Program has pre-qualified that SpeechKit 1.4.5 works properly on iOS 7, but we encourage you to conduct your own testing to ensure that went the upgrade happens, your Nuance speech services continue to work seamlessly.”

The question that remains is whether to trust the information or not. Nuance has worked closely Apple and I doubt if they don’t know about the general availability date. In the past, Apple has released the Gold Master (GM) release on the same day as the announcement, followed by a public released a few days later.

The time is near when we will see an official announcement from Apple about the September 10 event. Stay tuned to us and we will share any new information that pops up on the internet.