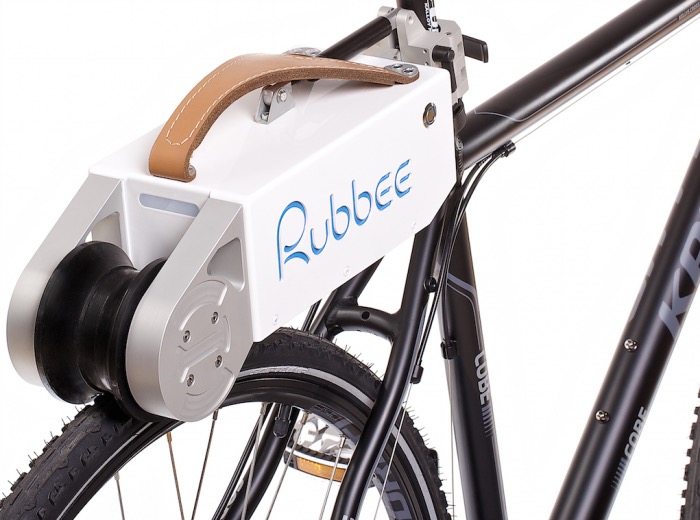 Cyclists that sometimes could use a little extra help navigating those larger hills or distances might be interested in a new electric bike drive called the Rubbee 2.0, which builds on the original design and now provides more power.

The original Rubbee electric bike drive launched over on the Kickstarter crowdfunding website and has now been developed into a second version , providing an electric power boosting one-piece system that can be attached to a bicycle in less than a minute.

Now the Rubbee 2.0 is equipped with a permanently-installed Pedal Assist Sensor that monitors how fast a rider is peddling, while integrated software monitors and tracks the speed at which the Rubbee motor is running. The Rubbee 2.0 Drive takes the form of a friction drive module which fits most standard bicycles and enables riders to reach speeds of up to 25 km/hr speed and travel 40 km. Its creators explain :

“Engineers at Rubbee developed a revolutionary way to make electric drive mounting super fast and effortless. After the initial installation, Rubbee can be attached or removed in a matter of seconds, making its usage easy and convenient to everyone, anytime

The aircraft-grade CNC produced aluminum parts as well as integrated battery management system, ensures unit’s longevity for thousands of kilometers.This all-included system uses friction – one of the oldest ways to transfer energy. The magic of Rubbee is in the way it transfers energy with very high efficiency by using state of the art compound materials for the friction wheel.”

For more information on the new Rubbee 2.0 Drive for bikes jump over to the official website for details and the ability to purchase your very own for $1,190.