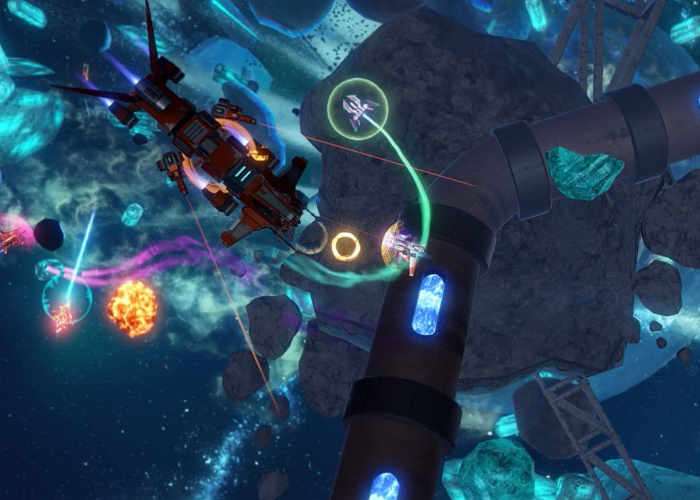 Climax Studios has today released a new trailer for their upcoming game RiftStar Raiders which has been created to provide the perfect mix of modern multiplayer, skill-based combat which has been inspired by retro shooters.

Marc Manuello Riftstar Raiders Design Lead at Climax Studios has taken to the official PlayStation blog this week to reveal more details about the upcoming game.

Do you remember these Wednesday afternoons spent at the arcade with your friends, using up your pocket money? We do, and we want to share that experience with you.

Some of those games were about competing against your friends and rivals, others were about cooperating. At Climax Studios, we have a fond nostalgia for those games — especially the shoot ’em ups! So we asked ourselves “What would a modern shmup, focused on cooperation, competition, and modern game mechanics, feel like? How could we relive the feeling of fun we had playing with and against each other?”

RiftStar Raiders is a top-down, fast paced shoot ’em up made by a team that loves the genre and wants to push it further. Unlike the majority of recent shooters, RiftStar Raiders gives players a more natural feeling, physics-based gameplay which takes practice and skill to master; your ship will react to the realistic forces applied to it, so maneuvering through an asteroid field or around a nebula takes real piloting skill.

You and up to three friends take on the roles of rogue pilots who’ll accept any type of mission as long as there’s cash on the table — no questions asked! Together you’ll be swept up in an all-out interstellar war between four factions, across nine hand-crafted missions in order to become the best smugglers, pilots, and outlaws that the Far Reach has ever known.

For more information on the new RiftStar Raiders jump over to the official PS Blog website for details by following the link below.