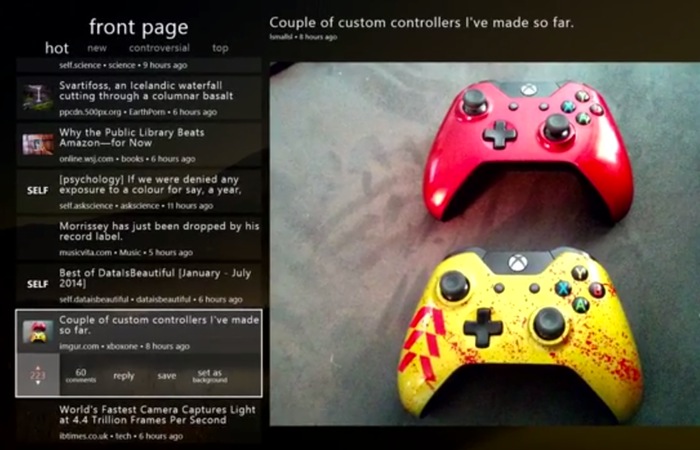 Xbox One owners that also enjoy browsing posts on reddit will be please to learn that a reddit Xbox One app called ReddX is now available to download and install on the next generation Xbox One console.

ReddX is the first app built for Reddit for consoles and enables lets Xbox Live members in the U.S. and Canada to check out every subreddit, in addition to a customised main page. Check out the video after the jump during which Harry Hryb, Xbox Live’s Major Nelson talks you through the new Xbox One app.

The ReddX Xbox app also enables users to upvote or downvote a thread with a simple touch of a button, together with the ability to add a comments using the Xbox One controller, media remote or Xbox SmartGlass. Major Nelson explains a little more about the reddit Xbox One app :

“You can combine your reddit experience with the biggest screen in your home: thanks to Xbox One, while you game, you can also browse the first-ever reddit app for the TV. ReddX on Xbox One can be Snapped to the side of your TV while you’re gaming or using another app to help you monitor and join in threads on the site while you’re doing anything else.

Thanks to ReddX, redditors can interact with each other in similar ways to the reddit.com experience, and in addition unlock unique media achievements named after some of the Internet’s favorite memes. In fact, I just posted the first reddit thread created from a console tonight before we officially launch in the morning – check it out here.”