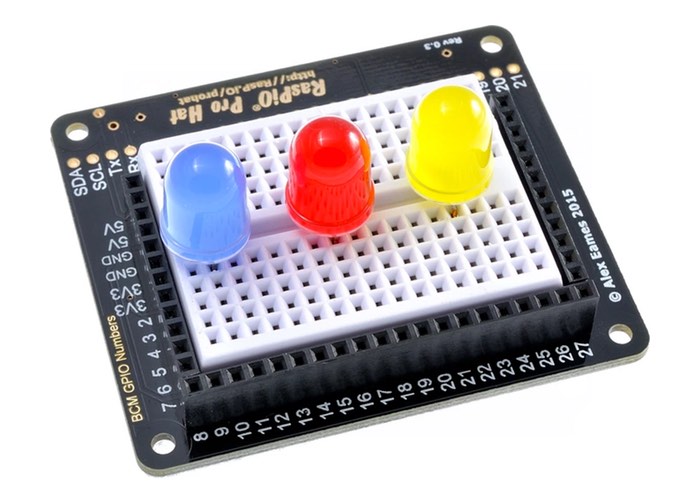 Alex Eames from RasPi.TV and serial Kickstarter entrepreneur has launched his fourth Kickstarter campaign this week with the launch of the new Raspberry Pi RasPiO Pro Hat he has created to help building projects using the Pi Mini PC even easier.

The RasPiO Pro Hat has also been created to help keep your projects safer and protects them from human error allowing you to access all the GPIO ports neatly arranged in numerical order.
Watch the video below to learn more about this new Raspberry Pi Hat which is now available to back via the Kickstarter website from just £10. Its creator Alex Eames explains more about the inspiration and design of the new RasPiO Pro Hat.

For a long time I’ve thought it would be helpful if there was a board that put the Raspberry Pi’s GPIO ports in numerical order. It seems like the obvious and logical approach for ease of use and learning. And yet nobody has done it like this – until now.

The Raspberry Pi Education Team uses the Broadcom chip’s GPIO numbers in all of the official resources. All of my RasPi.TV tutorials do as well. So you can use nearly all of these resources straight out of the box.

But, the way the pins are arranged on the Pi itself is not sequential and you could be forgiven for asking “why not?” (Design constraints and historical reasons.)

Features of the RasPiO Pro Hat include the ability to :

– protects the Pi’s ports in case you make a wiring error
– arranges the Pi’s ports in numerical order to make tinkering easier
– works “out of the box” with GPIO Zero – the new easy-to-use Python library included in Raspbian
– requires no soldering or assembly
– requires no software installation
– includes a 170pt mini-breadboard to build your circuits on
– gives you direct access to the ports if you need it
– requires no additional resistors for use with LEDS
– will have RasPi.TV-style tutorial experiments suitable for beginners and experts alike

Jump over to Kickstarter now to make a pledge and help the Raspberry Pi RasPiO Pro Hat become a reality. If you found this article interesting you might also be interested in this list of awesome Raspberry Pi Zero projects we have put together.