Valent F(x) has launched a new Kickstarter crowd funding capping this month for its new LOGi FPGA Development Board built for the Raspberry Pi and Beaglebone Black.

The LOGi-family is a series of FPGA development boards created with a dual-use purpose and to limit the sharp learning curve associated with FPGA development. To learn more about the new Raspberry Pi LOGi FPGA Development Board from its creators watch the introduction video after the jump. 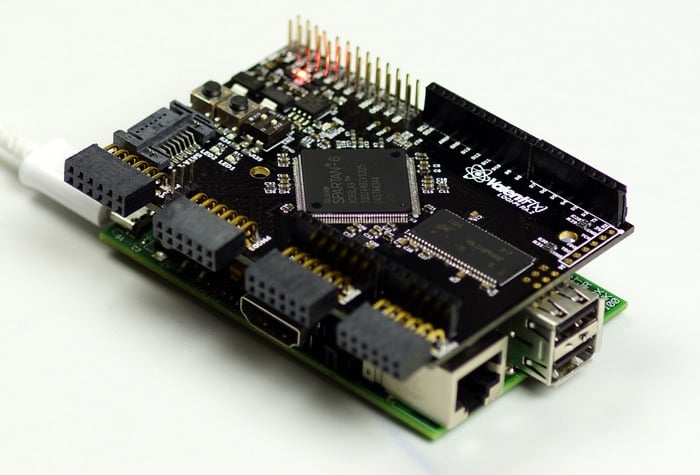 LOGi FPGA Development Board has also been built to enable the unification of existing hardware interfaces and open-source development platforms, such as the Raspberry Pi and Beaglebone Black. Valent F(x) explains a little more :

A field-programmable gate array (FPGA) is a programmable logic device that turns code written in a hardware descriptive language (HDL), such as Verilog or VHDL, into a specialized logic-circuit that can process data in a highly parallel fashion; enabling the FPGA to run an application or particular function with much better power/performance ratios than a typical processor. This is performance increase is due to the fact that typical software has to be translated from easily readable code, to a series of ones-and-zeros that is easily interpreted by the processor. An FPGA turns your easily readable code into a collection of connected logic-gates, enabling your idea to be realized as a specialized chip that does exactly what you want it to do, with minimum latency.

FPGA development is an invaluable technology that allows a single board to morph in functionality to fit the needs of changing project environments. However, that is just where Valent F(x) started. We all know there are other options for FPGA development, so what’s so new and interesting about the LOGi-family of FPGA boards? Our collaborative team wanted FPGA boards that could just as easily work with our favorite open-source hardware development boards, like the Raspberry Pi and Beaglebone Black.