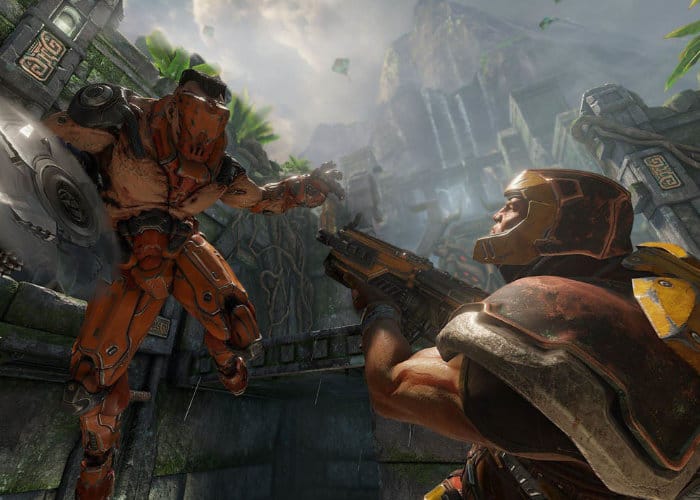 A major free update will be rolling out to the Quake Champions game next week, with id Software making the content available to download on March 15th 2018. The new Quake Champions update will add a new character to the game together with new game modes in the form of ‘No Abilities Mode’ in custom games, a new 2v2 version of Ranked Play for competitive players.

The major update will also bring with it a variety of tweaks, fixes and enhancements to Quake Champions together with Instagib. “The fast-moving, gib-tastic classic will finally make its way to Quake Champions, introducing a fun, fast and casual game where every shot is a one-hit kill. Players will start each match with the only weapons available – the Rail Gun and the Gauntlet – and there will not be weapon, health, armor, or power-up pickups. Champions will still be able to use active and passive abilities, and cool-down hourglasses will spawn on the map.”

Other new features include the introduction of the 2v2 TDM Ranked Mode offering a head-to-head intensity of Duel mode together with new cosmetics that allow Quake Champions to outfit their characters in a colourful collection of happy pastels for Weapon and Champion shaders together with spring themed profile icons name plates, and festive headwear taking the form of a unicorn hat, bird’s nest, and more. Finally the ‘No Abilities’ Mode has been added for players looking to go old school with options to turn off active Champion abilities but will only be available in custom games.

Quake Champions available to purchase via Steam early access and also directly from the official Bethesda website, allows players to unlock all current and future champions as well as other in game exclusives for $30.