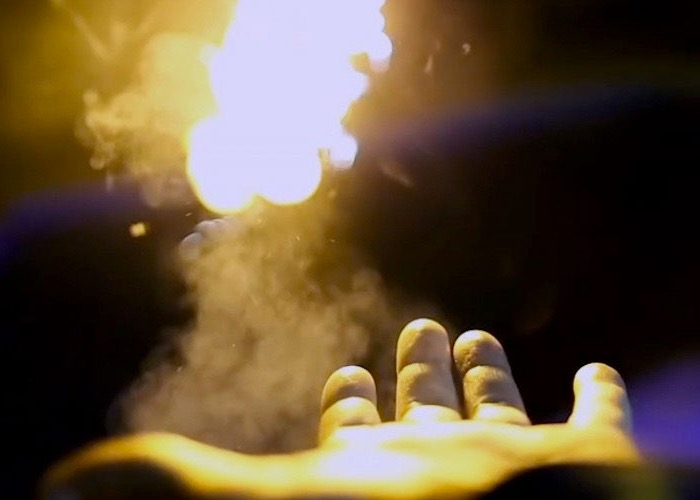 A new professional illusion device has been created called the Pyro Fireball Launcher, that has been specifically designed over the last two years to allow the wearer to launch fireballs up to a distance of 30 ft directly from the wrist mounted launcher.

The new Pyro Fireball Launcher wrist worn device is now available to purchase for $174, and is capable of firing up to 4 fireballs from 4 individually triggered barrels and can be seen in action in the video below.

Flash Packs that are used for the ammunition for Pyro, are supplied and each pack contains enough flash cotton and paper for over 60 uses. Its creator Adam Wilber explains a little more:

“Fire. Since the dawn of time it has been the reward at the end of man’s quest. Both creator and destroyer, it has historically been the element hardest to control. Until now. Your quest is over. The power of fire in the palm of your hand. That’s the power of PYRO.

The first of its kind, PYRO is a high-tech, wrist-worn, James Bond style device that allows you to shoot magnificent balls of fire from your open hand. Featuring four separate chambers for multiple shots, an easy to use remote device, soft touch finish and adjustable wrist strap, PYRO is about to turn up the heat on your performances.”

For more information on the new Pyro Fireball Launcher jump over to the Elluionist website for details.

“Pyro goes way beyond magic and puts an unexplainable, supernatural power in your hands. I don’t leave home without it and am constantly finding excuses to shoot fireballs from my empty hands.” – Daniel Madison