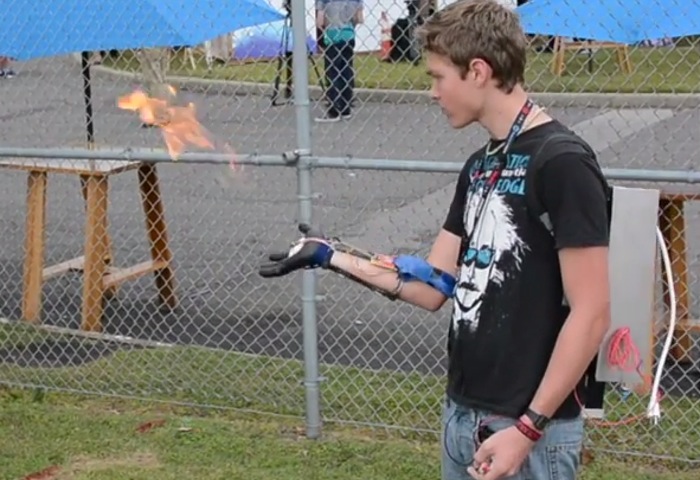 Over the years we have featured many weird and wonderful creations by makers and developers around the world. At the recent NYC Maker Faire Stephen Hawes unveil his new wrist-mounted flamethrower that he has created.

The wrist mounted flamethrower uses propane gas which is carried on the wearers back and uses a glove that measures the movements of your wrist to adjust the position of the flame.

Stephen has also equipped his creation with buttons underneath the gloved thumb that allow the user to control the height of the flame together with a Taser-based igniter which is currently under development.

To learn more about the wrist-mounted flamethrower from its creator check out the video below during which the new device is demonstrated outdoors. Apparently during the Maker Faire Stephen was accompanied by a NYC fire marshal for the entire duration of the show, making sure nothing untoward happened.

If you have created any amazing wearable devices please let us know using the tips email address found on our contact page. You might also be interested in these clever inventions created by UK inventor Colin Furze, that include magnetic shoes and some awesome Wolverine claws.