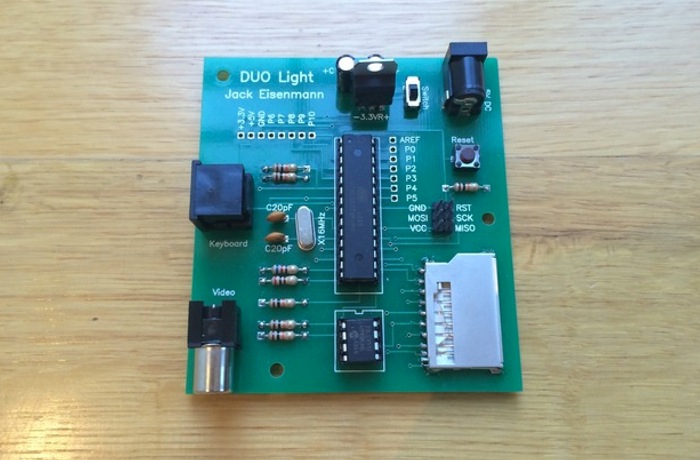 Developers and makers that are looking for an inexpensive single board mini PC that is capable of connecting to a composite video monitor, keyboard, and SD card. Might be interested in the DUO Light which has been created by Jack Eisenmann and takes the form of a hybrid Arduino UNO and the Raspberry Pi system.

The DUO Light mini PC has been specifically created for hobbyists to build software projects and is a low-power system that is capable of video output and receiving keyboard inputs.

Powering the DUO Light is the ATMega328, the same micro-controller as in the Arduino UNO. The micro-controller connects to a variety of peripheral devices, including a composite video monitor and SD card (in a similar fashion to the Raspberry Pi), PS/2 keyboard, together with general purpose I/O ports.

The second chip onboard is a 64 KB serial SRAM, which also connects to the ATMega328. The DUO Light project is currently over on the Kickstarter crowd funding website looking to raise $1,100 pledges to make the jump from concept to production. Check out the video below to learn more about the DUO Light from its creator and how it might be able to help your projects. Eisenmann explains :

So if you think DUO Light is something you could benefit from, visit the Kickstarter website now to make a pledge and help the DUO Light become a reality.