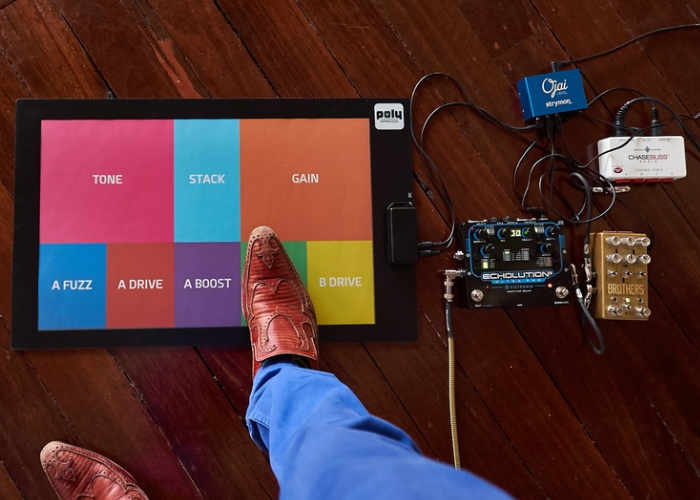 A new MIDI Foot Control called the Poly Expressive, created by a team at Chroma Coda based in Melbourne, Australia. Provides one large XY controller, offering 50 switches or anything in between. Poly Expressive has this week launched via Kickstarter to raise the $8,000 it requires to make the jump into production. Check out the demonstration video below to learn more about this unique board that allows you to control all of your pedals, amps and DAWs.

Chroma Coda explains more about the inspiration behind the Poly Expressive MIDI Foot Control and its features :

For a long time I wanted to control effects while playing guitar or bass but to do so I had to either take my hands of the instrument and turn knobs or control a single thing with an expression pedal. I wanted something better, so I created the Poly Expressive. I often run my bass or guitar through Bitwig or Ableton as well as pedals, layering sounds and triggering clips and samples to augment my playing.

Poly Expressive is a foot controller that gives you more fluid, musical control than ever before. Do you want something that switches between 20 presets with clear labels? Easy. Want much more including X Y pads and pressure sensitive controls? It does that too, and it’s all easy to set up with our setup app. Simply print your board from the app and slide it into the sleeve. Expressive control of pedals from Chase Bliss, Eventide, Pigtronix, Strymon and more, amps from Kemper, Positive Grid, Peavey and Hughes & Kettner as well as software like Ableton and Bitwig, all without having to take you hands off the instrument. Poly uses top quality components like Switchcraft jacks and lets you express more with your fee.

Poly Expressive is now available to back via Kickstarter with early bird pledges starting from just $329 and delivery expected to take place during March 2018. For full specifications and more information jump over to the official Kickstarter campaign page via the link below.