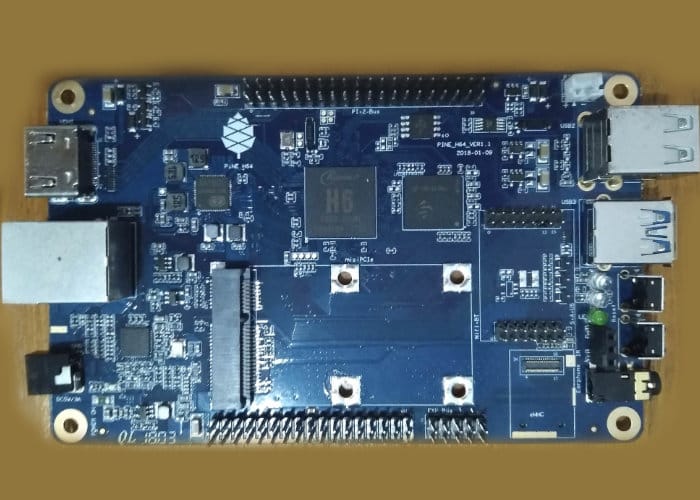 Following on from the unveiling of the new RockPro64 mini PC, Pine64 have also announced the imminent launch of a new Raspberry Pi style mini PC in the form of the Pine H64 which will be available from tomorrow January 31st 2018, priced at just $25, supporting 4K Ultra HD playback. The Pine H64 mini PC is based on the new Allwinner H6 SOC and will take the place of the previously launched Pine A64. The new Pine H64 will be equipped with a quad-core ARM Cortex-A53 SOC supported by Mali-T720 MP2 dual-core GPU capable of providing 4K60 and HDR playback.

Three different Pine H64 mini PC models will be available offering either 1GB, 2GB or 3GB LPDDR3 RAM together with 128Mb of SPI flash. As well as the ability to boot from USB 3.0 or 2.0 HDD or solid state drive (SSD) in addition to bootable micro SD cards and eMMC modules. Similar to the Raspberry Pi the Pine H64 PCB is fitted with a wide range of IO and expansion options users to enjoy. Including a mini PCIe connector allowing for the addition of different storage options as well as wireless and other expansion cards. Connections include 2 x 20 pins “Pi2” GPIO Header, Gigabit Ethernet, HDMI 2.0a and 3.5mm stereo earphone and microphone connection.

If you already own a Pine A64 DAC POT or the BT/WiFi module, you will be happy to know that both are compatible with the new Pine H64 mini PC, as is the case with the new RockPro64. The footprint of the Pine H64 is identical to the already available Pine A64/LTS mini PC, allowing you to simply swap over hardware if you require a little more processing power in your existing project. Before the end of the month Pine64 is also gearing up to release a BSP with kernel 4.9 for the board.