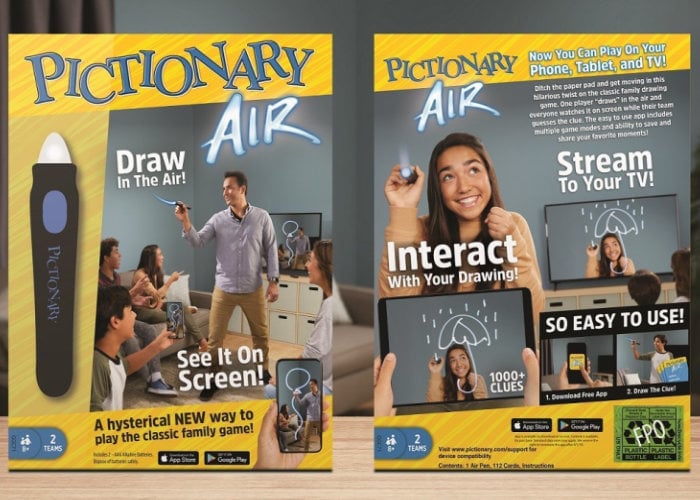 Pictionary is a great game to play and takes the form of a charades-inspired guessing word game during which you draw your clues for your team to guess. Mattel has now made a digital version of the game in the form of Pictionary Air which was unveiled during this year’s Toy Fair in February.

Pictionary Air allows you to draw your clues in midair using a special wand, the invisable drawing can only be seen either on your TV or your teams smartphones or tablets.

“Introducing Pictionary Air, a hysterical way to play the classic family drawing game! Draw in the air and see it on screen in this exciting take on the quick-draw classic. Download the Pictionary Air™ app to your smart phone or tablet to get started. Point the in-app camera at the illustrator and they’ll appear, along with their sketch, on the screen of your smart device. Cast to your TV for even bigger laughs!”

– Get up and get moving with Pictionary Air, a hilarious twist on the classic drawing game!
– Download the free Pictionary Air app, point the in-app camera at the illustrator and they’ll appear, along with their sketch, on the screen of your smart device.
– Take turns drawing clues in the air while your teammates guess the images that appear on the screen. The team with the most points wins!
– The easy-to-use app lets you record your performance and play it back for more laughs in between rounds, or save and share it with your friends.
– Adjust the round timer and number of rounds to give beginners or younger kids more time to draw. Selfie Mode allows you to draw without any time limits or rounds.
– For even bigger laughs, cast gameplay onto your TV from your phone or tablet using Apple TV, Chromecast or compatible streaming device at home. Compatible streaming device required. Check the Pictionary Air support page for device compatibility. You may also use adaptors (not included) to connect your phone/table directly to your TV via HDMI.
– Pictionary Air™ is perfect for any party or game night with 8-year olds and up. Includes Pictionary Air™ pen, 112 double-sided clue cards and card box. One AA Alkaline battery is included. 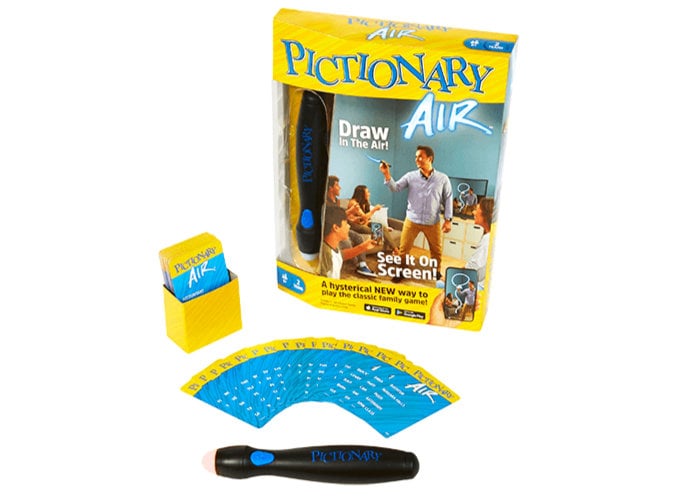 Pictionary Air was expected to launch earlier this month, but will soon be available to purchase from your local toy store or online store in the next few weeks priced at $20.

Mattel has also created a smartphone version of Pictionary. “The classic drawing game comes to life on your mobile device! The new Pictionary app will include features inspired by the classic top selling draw-n-guess board game, while incorporating an innovative real-time feature which will allow players to make guesses while they see what their partners and opponents are drawing. This new app will also feature a simple, yet fun and colorful interface with the spirit of the board game that fans know and love.”