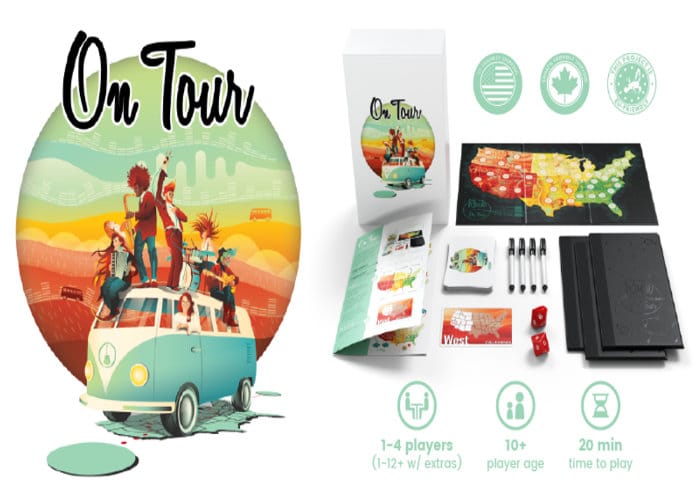 Are you searching for a quick to play, easy to learn board game that can accommodate from 1 to 12 players or more, you may be interested in On Tour designed and created by game designer Chad DeShon. Check out the demonstration video below for a quick overview of what you can expect from the gameplay and box contents.

Chad has this week taken to Kickstarter and already raised $22,000 helping the On Tour board game make the jump from concept to production. Gameplay consists of rolling dice to build a route across the USA, taking your band from one coast to the other. “On Tour is a 20 minute route-building, roll-and-write board game with large, premium components. One to four (12+, with additional maps) players share dice rolls and cards to try to visit as many states as possible as they schedule a 100-day tour across the United States for their band. “

Pledges are available from just $24 or £18 for the four player game and extra boards are available to expand the player base even further if desired. Worldwide shipping is expected to take place during January 2019 and the campaigners already raised over its $20,000 pledge goal with still 29 days remaining on its campaign thanks to nearly 700 backers. For more information and a full list of all the available pledges jump over to the official Kickstarter crowdfunding campaign page by following the link below.