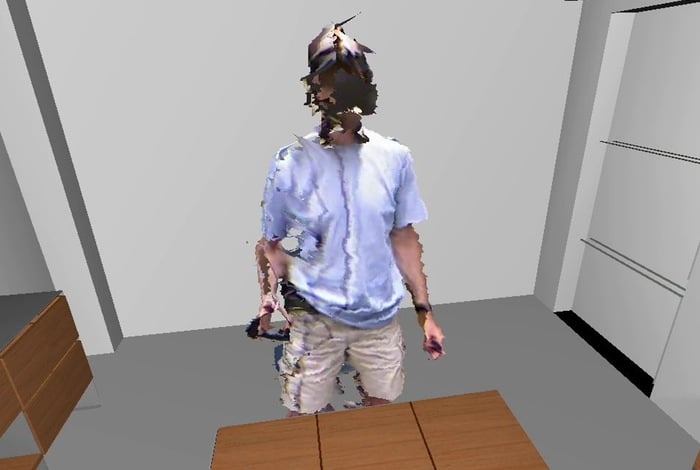 As you can see from the video’s the resolution of the transplanted body is not quite complete and is very rough around the edges however as the camera technology within the Kinect devices improves this will be eradicated, providing an awesome virtual reality environment into which users can be placed.

The system works so well even at a low resolutions Kreylos explains even though his limbs are rendered a little fuzzy, it felt as though his body parts were actually in the virtual reality room.

“Now, one of the things that always echos right back when I bring up Kinect and VR is latency, or rather, that the Kinect’s latency is too high to be useful for VR. Well, we need to be careful here, and distinguish between the latency of the skeletal reconstruction algorithm that’s used by the Xbox and that’s deservedly knocked for being too slow, and the latency of raw depth and color video received from the Kinect.

In my applications I’m using the latter, and while I still haven’t managed to properly measure the end-to-end latency of the Kinect in “raw” mode, it appears to be much lower than that of skeletal reconstruction. Which makes sense, because skeletal reconstruction is a very involved process that runs on the general-purpose Xbox processors, whereas raw depth image creation runs on the Kinect itself, in dedicated custom silicon.”

“The bottom line is that, at least to me and everybody else who has tried my system, latency of the 3D video is either not noticeable, or not a problem. Even when waving my hands directly in front of my face, they feel completely like my hands, and whatever latency is there does not lead to a disconnect. Based on several other observations we have made, such as the thing about swiveling in a chair I point out in the video, make me believe that 3D video, fuzziness and artifacts and all, creates a strong sense ofpresence in one’s own body.”

For more information on the new Virtual reality system jump over to the Doc-OK website for details.