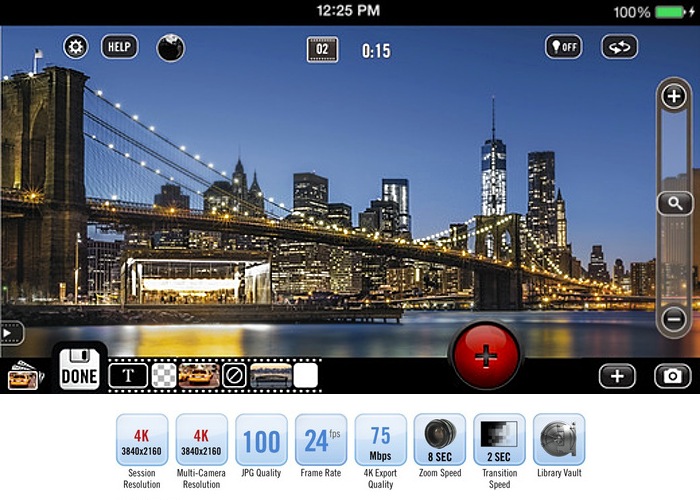 If you are looking to capture 4K Ultra HD footage from your smartphone, a new iOS application has been approved by Apple this week in the form of the Vizzywig 4K app by i4software.

Which is priced at $999.99 and is the very first iOS application that will enable you to capture 4K Ultra HD video footage and distribute it directly from your Apple mobile phone.

Unfortunately even though the Vizzywig 4K application has a huge price tag, it is currently only supported by Apple’s iPhone 5S device with either 32 or 64 GB of storage running Apple’s latest iOS 7 mobile operating system.

So if you are thinking of updating to the new Apple iOS 8 software when it’s released later this month you unfortunately will not be able to use the application anymore. Due to the the”Burst Mode” on iOS 8, that takes pictures at 10 images per second. Its creators explain a little more.

“Turn your iPhone 5S into a 4K motion video camera, 4K editor and 4K distribution platform with Vizzywig 4K by i4software. Rather than capturing video, VZ4K captures full 4K resolution photos at the rate of 24 photos per second along with synched audio. Edit, add 4K transitions, titles, scrolling credits and background music and upload straight to YouTube in full 4K.”

Upon purchase, email you are required to email the creators for VIP email, phone or text message support directly from the founder and inventor on this particular app due to the high price point. Learn more about the new high-resolution 4K Ultra HD standard jump over to our previous article which explains everything you need to know.