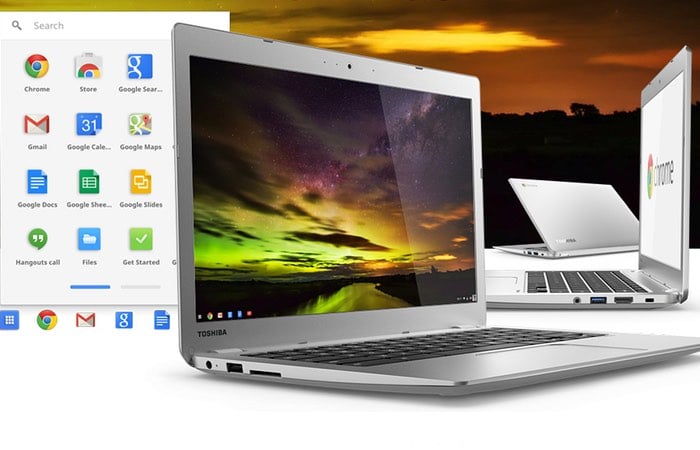 Toshiba has this week announced they will be launching a new Toshiba Chromebook 2 laptop next month running Google Chrome OS with prices starting from just $330.

The latest Toshiba Chromebook 2 will be made available in October and can be equipped with a range of more powerful processor options based on Intel’s 5th generation Core Broadwell architecture.

The new Chromebook 2 range will consist of two models priced at $330 with a Celeron processor and $430 when fitted with an Intel Core i3 chip. Both of which will be equipped with 13.3 inch IPS displays providing users with a resolution of 1920 x 1080 pixels and also backlit keyboards. Toshiba explains more :

Toshiba’s Chromebook 2 is a refreshingly different type of computer, designed to help you get things done faster, and be entertained from anywhere. Nothing complicated to learn. Starts in seconds. Stays up-to-date on its own. It’s ready to work, ready to play and ready to go—right out of the box.

Other features of the new Toshiba Chromebook 2 include stereo front facing speakers USB 3.0 and USB 2.0 ports, HDMI output, SD card reader and connectivity provided by both Bluetooth and 802.11ac WiFI. Jump over to the Toshiba website for more information via the link below.