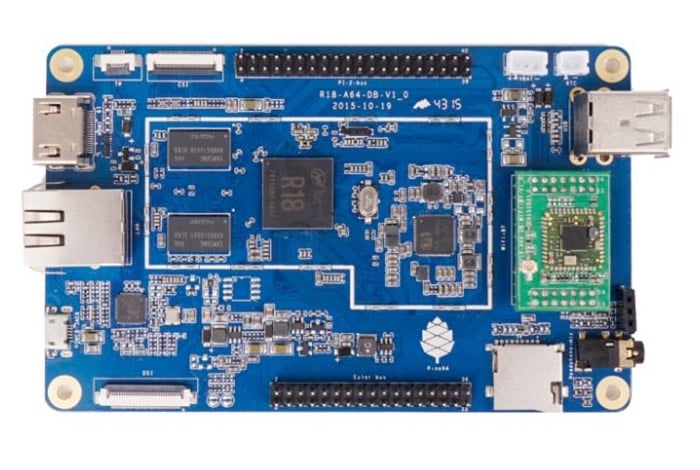 A new single board mini PC has been unveiled this week as that will soon be taking to the Kickstarter crowdfunding website to raise the funds it requires to go into production.

The new PINE64 mini PC will be capable of running a variety of different operating systems including Android 5.1, Ubuntu Linux, and others and will be available priced at under $20.

The PINE64 single board computer is powered by an Allwinner 1.2 GHz 64-bit ARM Cortex-A53 quad-core processor that is supported by up to 1GB of RAM with options for 512MB of RAM id required also available.

The Kickstarter crowdfunding campaign will start in two days time on December 9th 2015 and provide early bird backers with a chance to pledge for the 512 MB version at just $15 or for the 1GB version for $19.

PINE64 is an open source platform from both hardware to software.  It’s a versatile single board computer capable of running today’s most advanced 64 bit version of Android and Linux.  Our goal is to bring the most affordable 64-Bit computing solution to the world.  Use the PINE64 to build your next computer, tablet, gaming device, media player, and just almost anything you can think of.

Other features include ARM Mali 400MP2 graphics as well as 2 x USB 2.0 ports and HDMI connectivity that supports output for 3840 x 2160 pixel displays. Check out the video below to learn more about this new piece of hardware that will soon be launching via Kickstarter.