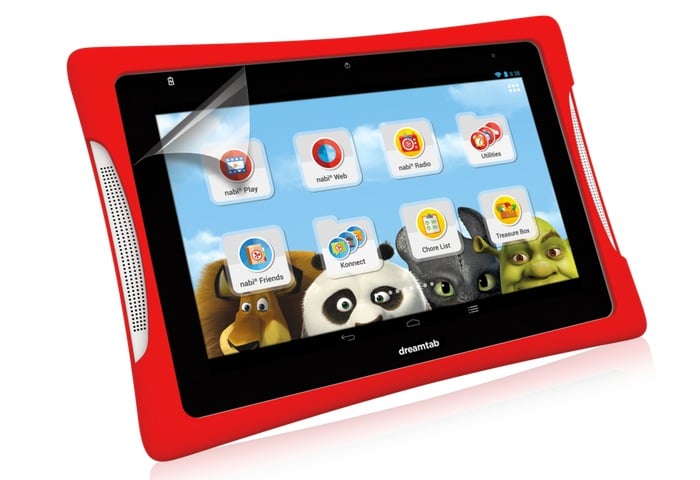 As well as launching their new Nabi Jr Tablet for kids today, which is equipped with a Tegra 3 processor. Nabi has also rolled out a new update for their Nabi DreamTab HD8 tablet that brings with it support for Google’s latest Android 4.4 operating system.

The Nabi DreamTab HD8 is available to purchase for $270 and is equipped with a quad-core processor supported by 2GB of RAM and offers 16GB of onboard storage that is expandable to 32GB via microSD cards to a maximum of 32GB when required.

The Android tablet is also equipped with a 2 megapixel front facing camera for video calling, together with a 5 megapixel rear facing for video and photographs. As well as an 8 inch Capacitive, Multi-Touch display offering a resolution of 1920 x 1200 pixels.

The new update rolled out by Nabi this week also enables the dormant NFC support that can now be used with the How To Train Your Dragon-branded Morpho Pods toys in the School of Dragons game. Together with obligatory bug fixes, enhancements and performance tweaks you would expect from an over the air update, that is available via the manual checking system within the tablets parent mode.

For more information on the new Nabi DreamTab HD8 jump over to the Nabi website for details, or check out the video below for a quick overview of the Android tablets features.

“Let’s write and draw with the only kids’ tablet that includes a high precision digital stylus that writes just like a pen. Let’s go! Like a pen writing on paper, Dream Pen is an extremely accurate, pressure-sensitive DIGITAL stylus that enables palm rejection. Write, draw, sketch and paint with the artistic control of traditional tools.”