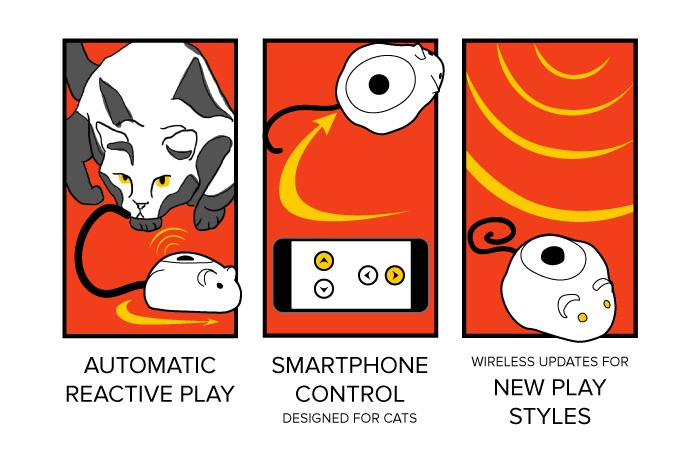 A team of three friends that include a Ph.D. and two Ph.D. candidates from the University of Illinois at Urbana-Champaign in Electrical Engineering have pooled their talents to create a smart robotic mouse cat toy  to entertain cats in a new an innovative way with the creation of Mousr.

Mousr is the first robotic cat toy that can see and react to a cat’s movements just like real prey. Check out the video below to learn more about the project and the technology behind the next generation of cat toy.

The Mousr project is currently over on the Kickstarter crowd funding website looking to raise $100,000 pledges to make the jump from concept to production. Its creators explain:

“Archeologists suggest that cats were first domesticated by farmers to hunt the little critters that ruined their crops. Keeping cats as pets indoors is only a recent trend. As such, domestic cats have maintained their natural hunting instincts but lack a proper outlet to express them. In the wild, cats hunt up to 20 times a day.

While being kept indoors is very beneficial to cat health and safety in a number of ways, not being able to express their natural hunting instincts has been shown to contribute to a number of negative behavioral habits.

Mousr is the first robotic cat toy that can see and react to a cat’s movements just like real prey. Think Pinky with a brain. Without a doubt, Mousr is the most technologically advanced cat toy ever to exist. We’ve been called crazy, and maybe we are, but personally we think cats are worth it. After all, cats are people, too.”

So if you think Mousr is something you could benefit from, visit the Kickstarter website now via the link below to make a pledge and help Mousr become a reality.