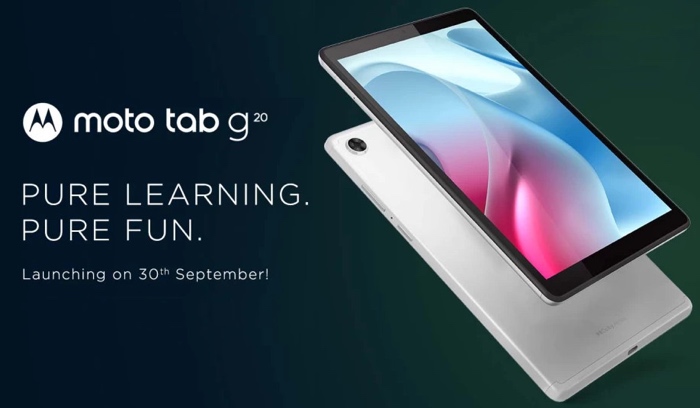 Motorola will be launching a new Android tablet next week, the Motorola Moto Tab G20. The device is launching on Flipkart on the 30th of September.

Some of the details on thew new Android tablet have been revealed, the device will apparently come with an 8 inch LCD display. As yet we do knot have any details on what sort of resolution the display will have, probably HD+ or FHD.

The new Motorola Moto Tab G20 tablet will be powered by a MediaTek Helio P22T mobile processor and it will also come with 3GB of RAM and 32GB of storage. It is not clear as yet on whether it will come with a mciroSD card slot.

The tablet will come with a 5100 mAh battery and it will feature Android 11 and Kids Mode, it will also come with support for Dolby Atmos.

The device will come with single cameras on the front and back, this will include a 2 megapixel front camera for taking Selfies and making video calls. On the rear of the tablet there will be a 5 megapixel camera for photos and videos.

As yet there are no details on how much this new Motorola Android tablet will retail for, as soon as we get some more details we will let you know.