If you are looking for something a little faster than a bike but not quite a fully blown motorbike, you might be interested in the Motoped motorised bike kit. Which is a self assembly kit you build yourself using a XR50/pitbike engine and standard mountain bike components.

The Motoped is equipped with a Honda xr50 or Chinese pitbike engine together with downhill mountain bike parts mounted to a custom frame and swing arm. Watch the video after the jump to learn more about the Motoped project and see it in action. 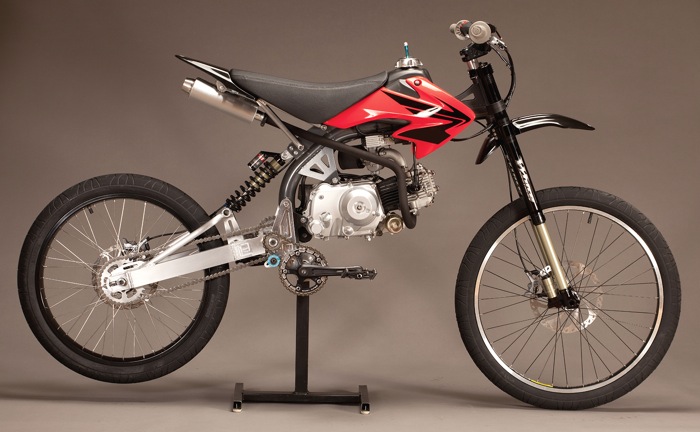 The Motoped has been designed to use the Honda 4-stroke engine. The designers of the Motoped explain why:

“The Honda 4-stroke horizontal OHV motor is the most popular and most copied engine in the world. It was first introduced in the Honda mini-trail 50 in 1969 and is still being used today almost unchanged in the crf50. The Chinese have been making copies of the Honda 50 for years now, with all kinds of variations in design and displacement, but all having the same motor mounts as the original Honda. The engines range from 50cc to 190cc.

The Chinese copies of the Honda xr50 has spawned a whole group of minibikes called “pitbikes”. The amount of aftermarket performance parts for the Honda xr50 and it’s pitbike clones is endless and readily available everywhere.”