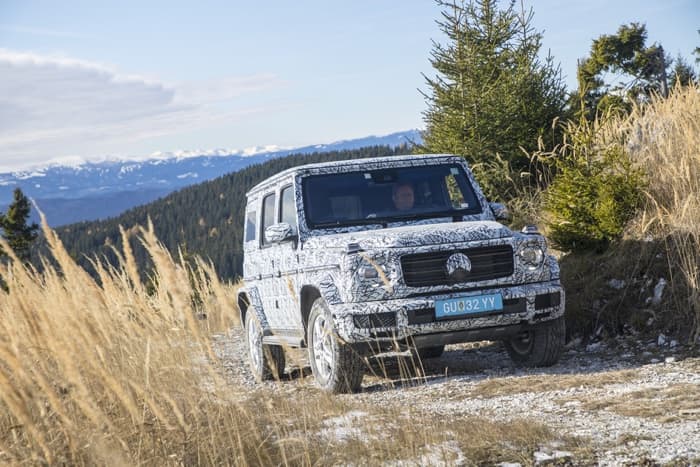 Yesterday we saw a teaser video for the new Mercedes G Class and now Mercedes have revealed more details about their new SUV.

Mercedes have released a picture of their new G Class covered in camouflage, the SUV is being tested at the Schöckl a1,445 meter high local mountain near the Austrian city of Graz that is used to test the car out.

Every G-Class has to conquer the Schöckl. Mercedes-Benz uses the 1,445 meter high local mountain near the Austrian city of Graz as a test track. The 5.6 km route includes gradients of up to 60 percent and lateral inclinations of up to 40 percent. During the development stage, a “G” has to endure over 2,000 strenuous kilometers on this very demanding course. The new G-Class masters the route with noticeably more control and comfort.

The primary goal of development was to make the new G-Class even more effective off-road. The G thus remains a true G – thanks to its standard ladder- type frame, the three 100-percent differential locks and LOW RANGE off-road ratio. Its suspension is the result of collaboration between Mercedes-Benz G GmbH and Mercedes-AMG GmbH. The result is an independent suspension with double-wishbone front axle in combination with a rigid rear axle. During development work, the engineers had the task of fighting for every millimeter, because off-road capability also means maximum ground clearance. The raised axle with independent suspension decisively contributes to this, and additionally increases the stiffness of the body with a strut brace.

You can find out more details about the new Mercedes G Class over at Mercedes Benz at the link below. This new SUV will be made official at the Detroit Motor Show later this month.