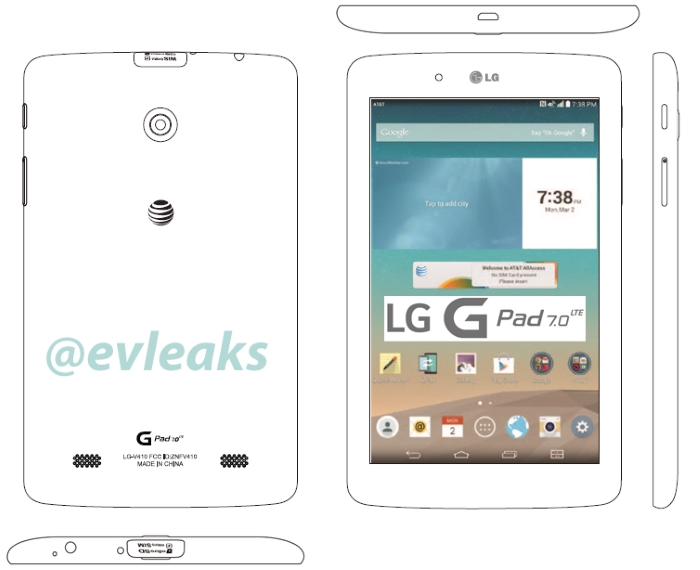 Not too long ago, AT&T released the mid-range Samsung Galaxy Tab 4 8.0 LTE on its network, but that’s not the only tablet heading to the major US carrier.

According to a new rumor, LG G Pad 7.0 LTE is also headed to AT&T in the coming months. Recently, the well-informed @evleaks posted an image of the LG G Pad 7.0 with AT&T branding on the back of the tablet.

Evleaks didn’t post a press render of the LG G Pad 7.0, but it appears to be a screenshot from the user manual of the device. LG launched the G Pad 7.0 a few months back, but the manufacturer was quite about what the tablet will offer in terms of specifications.

LG said the specifications will be announced at a later date, but based on reports, the device is expected to come with a 7-inch display sporting a resolution of 1280 x 800 pixels, with the processing power coming from a quad-core Snapdragon 400 SoC. The tablet is also said to come with 1GB of RAM, 8GB of internal storage with a microSD card slot, 3MP camera, a 4,000 mAh battery and should come with Android 4.4.2 KitKat as its operating system.

There’s no word about the pricing, but it shouldn’t be too expensive considering that it comes with a budget-friendly price tag in Europe. Verizon is also rumored to launch the tablet in the coming weeks. Let’s see who gets it out in the market first.