Monday LG announced three new Android tablets, the LG G Pad 7.0, the G Pad 8.0 and the G Pad 10.1, although at the time of the announcement, LG did not reveal the specifications for these new devices.

Now one of these tablets, the LG G Pad 7.0 has turned up in the AnTuTu Benchmarks, and this has revealed some of the specifications on this new 7 inch tablet.

The LG G Pad 7.0 will come with Android 4.4.2 Kit Kat and the device will feature a quad core Qualcomm Snapdragon 400 processor with a clock speed of 1.2GHz.

The device will also come with a 7 inch display that features a HD resolution of 1280 x 720 pixels, and it will feature front andf rear facing cameras. 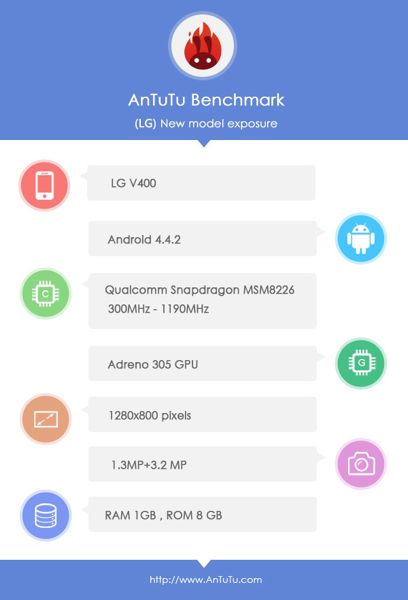 LG are expected to reveal the full specifications on all versions of the new LG G Pad later this week, as soon as we get some more information, we will let you guys know.