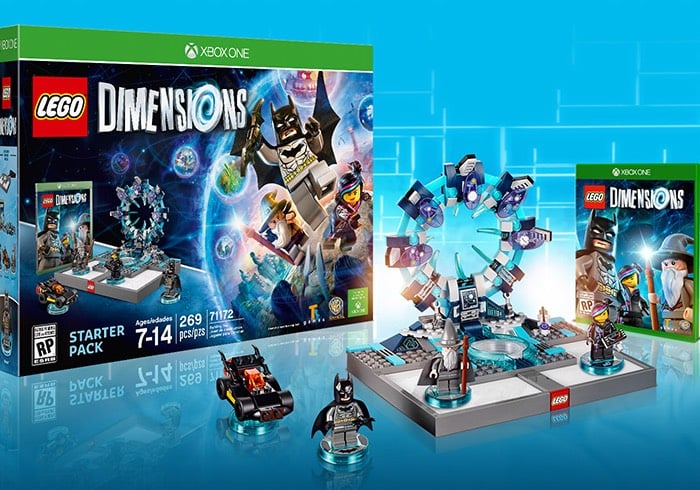 With an aim to compete with the likes of Skylanders and others, Lego has this week announced the launch of their new Lego Dimensions sets will take place during September 2015 just in time for the holiday season.

Lego Dimensions will be available to play on both next-generation PlayStation 4, Xbox One consoles as well as older generation Xbox 360 and PS3 consoles and Nintendo Wii U. Watch the trailer below to learn more about the new toy.

The starter kist for each console are priced at $99.99 and are now available to pre-order from the Toys-R-Us website as the Lego Dimensions Starter Pack.

When a mysterious and powerful vortex suddenly appears in various LEGO® worlds, different characters from DC Comics™, Lord of the Rings™ and the LEGO® Movie are swept away. To save their friends, Batman™, Gandalf™ and Wyldstyle™ bravely jump into the vortex to rescue their friends and fight to save all of LEGO humanity.

Let your creativity be your guide as you build the LEGO Gateway to adventure, journeying through unexpected worlds and teaming-up with unlikely allies on the quest to defeat the evil Lord Vortech. Play with characters you never thought you could see in a LEGO game together, using vehicles and weapons you never thought possible. LEGO Bad Cop™ driving the DeLorean Time Machineâ¦why not?! The Ninjago Masters of Spinjitsu fighting alongside Wonder Woman™…yes, please! Get ready to break the rules, because the only rule with LEGO Dimensions is that there are no rules.

An Extreme Cross-Over. For the first time in any LEGO videogame, characters from a mix of the best brands in the universe join forces and battle in worlds outside of their own.

Keep Expanding. By purchasing additional expansion packs, you can grow your collection with a variety of your favorite brands to create even more crazy combinations.

More is Better. Bring up to 7 characters, vehicles and weapons into the game all at once by dropping them on the LEGO Gateway for the most exciting and action-filled game around

Play Alone or with a Friend. Let your imagination guide your solo journey or have a friend join the adventure with co-operative, drop-in/out play.