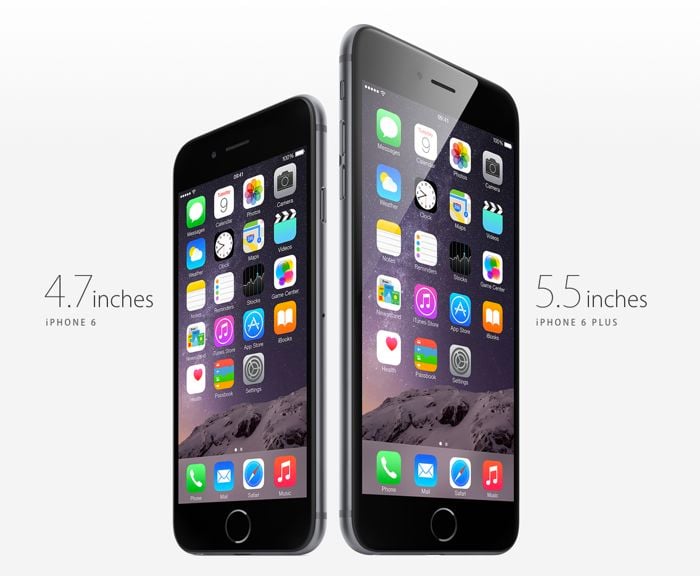 The new iPhone 6 handsets go up for pre-order tomorrow, if you are looking to buy one, and haven’t decided which one is right for you, here are some details on the iPhone 6 vs iPhone 6 plus.

The handsets are both powered by the same 64-bit Apple A8 processor and also feature the new Apple M8 motion coprocessor, and the devices are expected to come with the same amount of RAM, although Apple has yet to reveal how much RAM they have.

Both the iPhone 6 and iPhone 6 Plus will come with Apple iOS 8, they will also come with Apple’s new Apple Pay mobile payments system and TouchID, which will let you unlock your handset with your fingerprint.

The 4.7 inch and 5.5 inch versions of Apple’s new iPhone have the same cameras, up front there is a FaceTime HD camera which is capable of HD video.

On the back of the two handsets there is an 8 megapixel Apple iSight camera with 1.5µ pixels, plus an f/2.2 aperture, and a True Tone Flash, plus a five element lens. Both devices can record full HD video in 1080p at 30 or 60 frames per second and can also record slow mo video at 120 or 240 frames per second.

The difference between iPhone 6 and 6 plus cameras, is that the larger iPhone 6 Plus comes with Optical Image Stabilization, this is something that is not included on the iPhone 6.

If you are looking to buy the handsets with a contract, the iPhone 6 starts at $199 and the iPhone 6 Plus starts at $299, both devices will be available to pre-order from Apple tomorrow.